Discussions: “How can the elections influence Lithuanian Poles?” – speeches about surnames and tips about blackmail 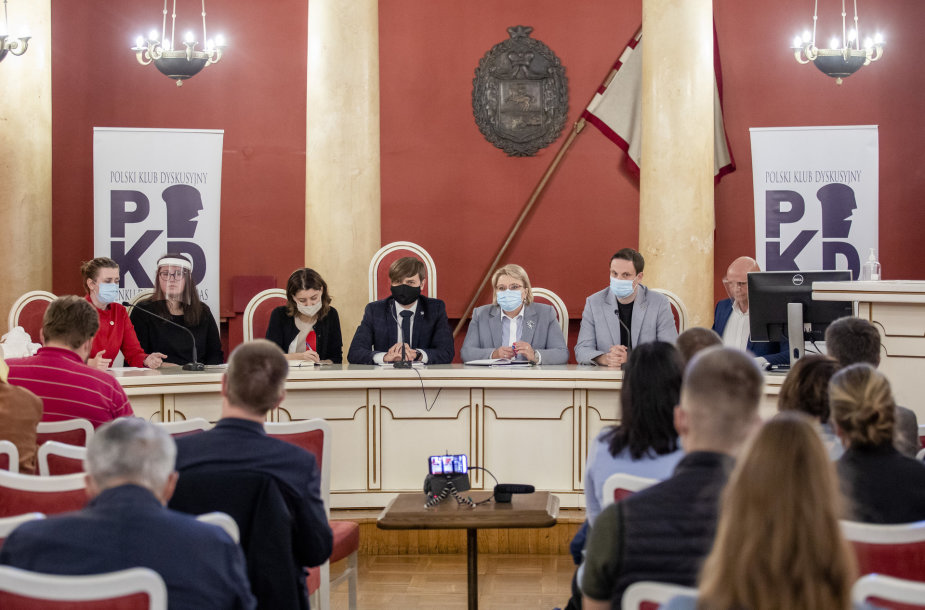 Representatives of many parties are encouraged to join various discussions before elections to the Parliament on October 11. During a debate in the Polish Debate Club, politicians were asked how these elections can influence the biggest community of national minorities in Lithuania – Lithuanian Poles. This time, the leaders of nonpartisan lists participated in the discussion.

Organizers of the event said that even though the leader of LLRA-KŠS, Valdemar Tomaszewski, has promised to participate in the debate twice, he eventually did not make an appearance.

At the beginning, the participants had a possibility to introduce themselves and the issues which they find to be the most important for national minorities.

D. Šakalienė claimed that Poles and representatives of other national minorities should have an access to media information in their native languages, and this idea should be developed.

“One of human rights is the ownership of the name one was given by our parents” – said D. Šakalienė about the National Minority Act, stressing that in communes inhabited by many other national minorities, information should be provided in their native languages.

In her introduction, Mrs. Dobrovolska stressed her input in designing legislative acts concerning national minorities and representing those defending their rights in court. She also stressed that certain projects, which are being prepared and addressed especially for national minorities, will never be accepted due to them conflicting with other rules, including the language act.

Furthermore, in her opinion, the existence of bilingual Polish-Russian schools is irrational, as Polish children are being russified  because they cannot encounter Lithuanian language.

M. Navickienė, chosen from the Naujoji Vilnia constituency, admitted that she is forced to work in a multilingual community. She said she is surprised that no one has accepted the surname act before, as despite the appeal of 70 Parliament members, no one has brought the issue. According to M. Navickienė, this matter should be explained by nation’s authorities.

She also mentioned the apparently moving re-transmission of Polish television channels in the South-East of Lithuania. “We should discuss not only personal but also political matters which could have improved the situation of these people. We need to ask about the culture of insufficient representations. Our party does have some suggestions which could improve the quality of education” – said M. Navickienė

R. Cytacka began her speech by mentioning the Vilnius University, founded by S. Bathory, where the meeting was taking place, and by discussing Polish problems and the need to use the state language instead of the native one. This is considered to be the violation of law.

“Today, promises will be made about national minorities living a better life after October. This is what we’ve been hearing for the past 30 years from various politicians” – she said. Mrs. Cytacka tried to refute the  statements of her colleagues who have already spoken in the debate and stressed that the party she represents is working instead of making promises.

T. Tomilinas stressed the fact that no language is being imposed and one is able to speak Polish, but since not everyone will understand it, it would only be respectful to use the state language.

According to T. Tomilinas, trifle topics – such as names of bus stations or even surnames – should not be moved. “We should also invite teachers of Polish language to Lithuanian schools, since Polish is one of Vilnius’s historical languages and it is worth to learn it” – said the member of the Parliament, reminding that the current authorities have improved their relations with Poland.

A. Lydeka reassured that the Liberal Movement, which he represented, attaches a great importance to human rights, including the rights of national minorities. He stressed that his political party does not want to promise anything to the Polish minority, especially before the elections.

“The community of Polish origin consists not of the disabled but of normal, well-educated and hardworking Lithuanians who, like every other citizen of Lithuania, are able to achieve their goals here. Obviously, these goals are rather specific” – said A. Lydeka, mentioning differences not only between the National Minority Act and spelling of surnames, but also between education and media.

Mention of blackmailing the authorities

R. Cytacka heard this question due to the fact that it is not the first time when LLRA-KŠS, the party she represents, has the majority in the Parliament. Currently, there are two members of her party within the Parliament which marks a perfect occasion for moving issues important to national minorities.

“As a political scientist, you should understand what coalition is” – said R. Cytacka to the moderator Marijuuš Antonovičius. “We are in coalition but we do not have majority. If we’d had it, every issue would’ve been solved by now. We need a political will and no one knows when that will happen.”

When asked why her party colleagues had not blackmailed other coalition partners, since the majority of LLRA-KŠS will fall, R. Cytacka claimed that she is able to blackmail and had done so, which can be confirmed by her colleagues from the ruling party.

Tomilin did not confirm the blackmail, however, he did mention that surnames are not the major problem as the majority of community does not want to use signs in them, even though he himself would support such an act. Nevertheless, the most important matter is improving education and encouraging those who do not speak Polish to learn the language.

R.Cytacka was also asked how does she feel in Lithuania, as both she and her party colleagues often hear complaints and critique regarding Lithuania.

“Lithuania needs to talk about love by using its creations. I love it and I would do everything for its good but how am I supposed to prove that? I have never received a penalty for not using a driving ticket, not to mention more important matters” – she reassured.

Translated by Aleksandra Sokół within the framework of a traineeship programme of the European Foundation of Human Rights, www.efhr.eu.

Polish and Lithuanian diplomas ought to be recognised automatically