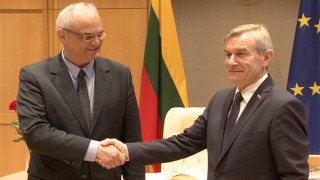 The new chairman of the Lithuanian Parliament is positive about issues in which the Polish minority in Lithuania is interested – said Jarosław Czubiński, Polish Ambassador in Lithuania, after the meeting with Viktoras Pranckietis. However, as noted the Polish diplomat – in politics rating of effectiveness is based on the results. During the meeting, politicians discussed projects concerning economics and regional security involving Poland and Lithuania as well as mutual relations. À propos, the head of the Lithuanian parliament welcomed his guest in Polish.

“Politicial summits tend to be rated according to their results. The meeting was interesting, but not devoid of elements of the protocol. We talked mostly about issues concerning our bilateral relations, not forgetting that both Lithuania and Poland are an important part of EU, or even global cooperation, in the ONZ dimension. However, most of topics of our talk concerned bilateral issues: economic and security problems as well as issues of the Polish minority in Lithuania”, told Wilnoteka Jarosław Czubiński, Polish ambassador to Lithuania. Asked about details, he answered, “We talked on specific topics, well-known by these who have been interested in the subject since 25 years, at least”.

“Poland is a strategic partner of Lithuania, very important for preserving the security of the whole region. During the meeting we devoted a lot of attention to issues related to the Eastern Partnership, Ukraine. We discussed bilateral infrastructure projects, such as Rail Baltica, the GIPL gas connection, electricity connection. Such bilateral projects are not only in the interest of our countries; they are very important for the energy security of the whole region, as they will connect the Baltic countries with central Europe”, said Kęstutis Kudzmanas, a diplomat and adviser to the President of the Lithuanian Seimas Committe of Foreign Policy. As he noted, Lithuania supports Poland in terms of the intermarium alliance – a bloc of countries between the Adriatic, the Baltic and the Black Sea. It is a wedge extending from the north to the south, which is supposed to create a counterweight to imperial attempts of eastern and western neighbors – Russia and Germany.

Jarosław Czubiński told Wilnoteka that during the talk with the head of the Lithuanian parliament the topic of a possible visit of Viktoras Pranckietis in Poland had not been discussed. Adviser to the President of the Seimas Kęstutis Kudzmanas informed that in March 2017 in Warsaw will take place a session of the Parliamentary Assembly of the Parliament and the Polish Senate, the Lithuanian Seimas and the Supreme Council of Ukraine – for the first time Viktoras Pranckietis will take part in the deliberations. It will also be his first visit in Poland.

Linkevičius: we have a new government and the issue of national minorities can be considered again

LLRA MPs voted for the program of the Government

Lithuanian Parliament is urgently proceeding with a project on facilitating the change of the nationality entry…
Kurier Wileński March 3, 2022

“Solidarity with Ukraine” Concert in Vilnius

On March 1, a concert “Solidarity with Ukraine” by the Ukrainian band Horpyna from Olsztyn took…