Inauguration of the Polonia Advisory Council 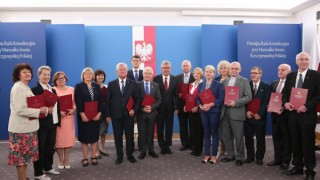 On Monday, September 5th in the Senate of the Republic of Poland, the Polonia Advisory Council was officially set up by the Marshal of the Senate. It was created with the act of the upper house of Parliament on 7th July. The Council consists of 16 members, including Rita Tamašunienė – a governor of a fraction of the Electoral Action of Poles in Lithuania – the Association of Christian Families in the Sejm of the Republic of Lithuania.

The Marshal of the Senate Stanisław Karczewski handed the acts of establishment to representatives of Polonia from all continents and thanked them for accepting the invitation to the Council. He declared that the Senate together with the Council will work in favour of Polonia and Polish national community.

The ceremony was attended by Deputy Speakers of the Senate – Maria Koc and Bogdan Borusewicz and members of the Senate Emigration Affairs and Contacts with Poles Abroad Committee with the president Janina Sagatowska, as well as a head of the Cabinet of the President of Poland, minister Adam Kwiatkowski, a deputy minister of Foreign Affairs Jan Dziedziczak and a leader of the Parliamentary Committee for Communication with Poles Abroad Michał Dworczyk.

The Marshal of the Senate explained in what creating of the national community would consist. It will be multi-dimensional cooperation in many areas: teaching Polish, cultivating Polish tradition, education, science, culture. He expressed his satisfaction with realization of an election promise of PiS – the Senate was returned fundings for Polonia. According to Karczewski, the change in form of financing was a bad decision of the previous government, now, however, when the money is back in the Senate, it is going to be properly disposed for the common good.

Stanisław Karczewski expressed his hope for the Council and Polonia becoming Polish ambassadors and working to build a good image of the country. “It is often said wrongly, falsely about Poland, and our common task is to oppose, as Poland is our homeland”, he said. He also mentioned that Polonia is a diverse community, also because of different periods of the Polish emigration. “We are open for everybody and we will cooperate with everybody”, promised the Marshal. “Nothing about Polonia without Polonia. We will listen to you and work with you”, he added.

Jan Cytowski, the president of the Council of World Polonia, spoke on behalf of the newly appointed council. “ As family members care for their common good, so we will care for and help the Marshal and the Senate in creating of this great national community. We have to care for the image of Poland and Polish people, so we could be a family, so Poles could live better and so we could be proud of that”, he said.

The Polonia Advisory Council was established again for a resolution of the Senate at the beginning of July. Its task is eg. to express opinions on topics of bills related to the Polish community. Originally the Polonia Consultative Council of the Marshal of the Senate was created by the Senate of the fifth term in 2002. It functioned until 2012, when fundings for care of Polonia and Poles abroad were transferred to the Ministry of Foreign Affairs. Members of the Council are appointed and dismissed by the Marshal of the Senate. They are chosen from persons representing Polonia and Polish abroad organizations; they will perform a honorable function. The term of the Council will last as long as the term of the Senate. The Marshal will convoke a meeting of the Council at least once a year and he will chair the meeting. He will also be able to consult the members by circulation, without convening a meeting.

Members of the Polonia Advisory Council

On Polish diaspora forum in Krynica- Polish schools in Lithuania

A group of Members of the Lithuanian Parliament went to Warsaw to discuss preliminary work before resuming…
Znad Wilii September 5, 2018

Forum Polonia: No ambassador will do as much as an active Pole

“We are going to talk about Poles and Polish Community abroad on variety of subjects.” said…
Znad Wilii May 5, 2018