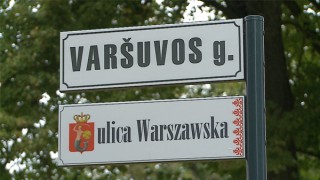 The bilingual sign in Vilnius, the photo by wilnoteka.lt

There are two more bilingual plates in Vilnius, Lithuanian-Russian and Lithuanian-Polish. The unveiling of the plate with the name of the street Rusų in Russian in the Vilnius’s old town was held without any protests from the side of the opponents of bilingualism. However, the ceremony of unveiling of the sign with the name “ulica Warszawska” in Rasos was accompanied by a picket of nationalists who kept shouting “Gėda! Gėda!” (Shame! Shame!).

“I’m glad that we live in such a wonderful city, which, since its founding, has been multinational and even today the diversity of cultures is abundant: Lithuanian, Polish, Jewish, Russian Tatar. We have huge richness. I encourage you all to be proud of it and cherish it. The unveiling of that plate might not be the most important event for the city, but surely is very important. The street plate with the inscription “Warszawska”, which has been named like this for over one hundred years, is needed not because the Poles who live in Vilnius do not know Lithuanian language but because the plate is a symbolic. This plate is a symbol, it is needed so that we can be proud of our history, tradition, and each other. A bit of a pity that this street is not in the old town, but on the other hand, it is located in a beautiful and important place, next to the Rasos Cemetery. We have German and Russian streets in the old town, however, we do not have Polish and Lithuanian streets there. That is probably the best illustration of the past, and to whom did this city belong back then” – the mayor of Vilnius, Remigijus Šimašius, have said.

The unveiling of the plate was done by the mayor of Vilnius and the manager of the Polish Institute in Vilnius, Marcin Łapczyński. The ceremony was accompanied by music of the band “Melodia” from Naujoji Vilnia (manager – Janina Stupienko)

The event was attended by a picket of nationalists who held the posters with such slogans as: “R. Šimasiau, ar lietuviai Vilniaus okupantai?” (R. Šimašius, are the Lithuanians occupiers in Vilnius?”, “R. Šimašius = L. Želigovskis”). The participants of the picket came to boo and shout: “Gėda”. According to the protesters, the authorities of the city are unveiling the non-Lithuanian plates in secret. When asked, why they didn’t protest a few weeks ago when the sings with Icelandic and English names were being unveiled, one of the protesters said: “They did  not occupy us”.

An hour earlier, in the old town, a plate with inscription “Русская улица” has been unveiled. Without a protest of the nationalists. On the same day, the Russian plate has been blurred by an unknown perpetrator…

Based on: own information
Camerawork and editing by Paweł Dąbrowski.

Inauguration of the Polonia Advisory Council

“This exhibition is a symbol that today takes on a special meaning of the fight for…
Znad Wilii February 24, 2022