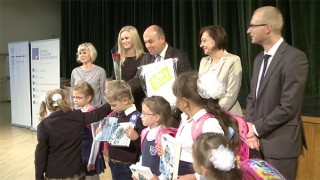 Jan Dziedziczak, Secretary of State of Foreign Affairs of the Republic of Poland, personally arrived in Vilnius, to hand the representatives of Polish schools extraordinarily rich school sets and “Bon for first grade pupil”- a financial support amount 500 zl. Schools will be responsible for a decision how the money will be spent, because they know their students needs the best. The school sets and the bons for little compatriots in Lithuania were  prepared by “The Foundation Aid to Poles in the East”  from the founds of Polish Ministry of Foreign Affairs. Before the celebration, which was held in The House of Polish Culture, Secretary of State Dziedziczak met the representatives of the Joachim Lelewel Secondary School in Vilnius community, after handing out the school sets for Vilnius schools and Vilnius and Tracki regions, he went to Soleczniki, where exactly the same gifts were given to polish schools in Solecznicki region.

Polish MSZ Secretary of State Jan Dziedziczak for the second time this year, came to Vilnius exclusively for a meeting with compatriots – similarly to the visit, which was paid a half a year ago, this one was on Saturday, and its program did not included any official meetings with the representatives of Lithuanian authorities.  The minister was accompanied the director of the Department of Cooperation with Polish Diaspora and Poles Abroad Mateusz Stąsiek and the management of “The Foundation Aid to Poles in the East”- a Chairman Mikołaj Falkowski, who a few months earlier took over the leadership in this foundation after, a well-known by Vilnius citizens, Janusz Skolimowski, and Ewa Ziółkowska.

The meeting with the Joachim Lelewel School community allowed guests from Poland to convince themselves, that a part of this community has not already believed in effective actions of Polish politicians, neither these from Vilnius nor these from Warsaw, and the only wanted thing is to return to a regular functioning in any building as fast as possible. The RP ambassador in Lithuania Jarosław Czubiński, assured several times that, he brought to the Vilnius mayor and its authorities notion that improvement of comfort of functioning the majority (Lithuanian school in Antokol) at the cost of the minority (“Lelewel”) is against the European law and far from the rules functioning in civilized world. Minister Jan Dziedziczak informed that he was talking about “Lelewel”, even with Prime Minister Andrzej Duda during their recent meeting in Croatia (first official) with Prime Minister Dalia Grybauskaite.

The hall of the House of Polish Culture was filled with parents, teachers and little students from Polish schools. As a matter of fact, the majority of first grade pupils have already got the school sets from Poland in their holiday –September, 1st, but this time there was an opportunity to thank donors directly. Although, at the beginning, it were guests who thanked gathered, for choosing exactly Polish schools, which according to assurances of Józef Kwiatkowski, Chairman of Association of Polish Schools Teachers in Lithuania ‘Macierz Szkolna” –they are more and more competitive, as a proof can serve high notes in the Lithuanian schools ranking, and it does not concern only schools in Vilnius, because also regional institutions can be proud. There are not still any school in which classes are lead in Polish in the top 10 of elite Lithuanian schools, but among decent schools (the first 50 among about 500 Lithuanian schools) every year there are a few. These all the concrete  things.

Symbolic delegations of first grade pupils, literally weighed down with gifts- rucksacks were coming apart at the seams, what is more, everyone got  a book “Polish fairy tales and legends” and an educational game “A little Pole”, funded by the Institute of National Remembrance. To Sum up, 1100 first grade pupils in Lithuania were given a present. “The Foundation Aid to Poles in the East”, which has won a competition and could execute a project entitled ”Additional support of Polish education in Lithuania and Latvia in 2016” organized by The Ministry of Foreign Affairs of the Republic of Poland, received entire 1 000 000 zl, to support first grade students in Vilnius region ( action under the slogan “Bon for first grade pupil”) as well as 500 000 in order to “improve the long-term attractiveness of the Polish education in Latvia”.

The action of supporting first grade pupils of Polish schools in Vilnius region has been carried out for a few years- initially little students were given only rucksacks and backpacks with necessary contents, what was a precious support, especially for students from less affluent families. Then, there was various future of these school sets, some students prefered to ask parents for more “savage” or modern rucksacks. Experienced teachers managed to convince parents, that such identical school sets- it is a good way, to avoid dividing students into ones “who afford” and these “who do not afford”, from the first days of classes.

In time, Polish authorities added money to school sets – 500 zl, which initially were given to parents, but then, was made a decision, that it is better to use money together for after-school activities, trips and another forms of education. Of course, the Lithuanian side accused of “bribing” parents, to convince them not to send their children to Lithuanian schools. In facts, it did not impinaged significantly on influx to Polish schools, ex. from mixed families. Admittedly, that time were more not less first grade pupils in Polish regions schools, where AWPL-ZChR rules, but less students started their education in institutions in Vilnius, where undoubtedly confusion with education reform, standardization of Lithuanian language exam and reorganization of chain of schools had a negative impact.