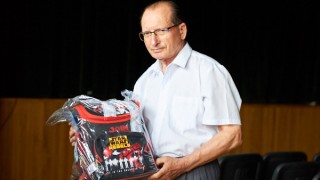 The school sets for freshmen from Polish schools funded by the Foundation “Aid to Poles in the East” arrived to Vilnius. Fully equipped backpacks will be handed out on the occasion of the inauguration of the new school year. This year the Polish schools in Lithuania expect 1101 first grade pupils.

1101 fully equipped backpacks arrived to the House of Polish Culture in Vilnius on Monday, the 29th of August. “In each backpack a student will find all he needs: notebooks, pens, pencils and other things – nicely looking good-quality products. In addition, each student will receive a breakfast set to pack their breakfast to be taken to school: a container for sandwiches and a bottle for beverages, a board game “Little Pole” and the book “Polish Legends”. I have to admit that these are the best sets we received so far from Poland” – said the president of the Association of Teachers of Polish Schools in Lithuania “Macierz Szkolna” Józef Kwiatkowski.

The school sets for freshmen from Polish schools were funded by the Foundation “Aid to Poles in the East” from the funds received from the Ministry of Foreign Affairs within the framework of the project to support Polish education in Lithuania.

In December 2015, the Polish authorities announced they will provide financial support for Polish schools in Lithuania in the amount of 500 PLN for first class and senior year students. “Education is, without question, the most important thing. There is the education and then nothing for a long time. (…) We want to make it at least a little bit easier for the Polish in difficult situation. Hence the unprecedented decision of the Polish government and the Ministry of Foreign Affairs to grant 500 PLN for all the children of Polish origin in the first and the last – 12th – class. Apart from being a financial support, it is also a symbolic gesture showing that it is worthwhile to study in Polish schools. It is worthwhile to choose the more difficult way, to go against the wind, because there are more important things in life than just comfort”- said Jan Dziedziczak, Deputy Minister of Foreign Affairs.

“We do not know yet how we will redeem the vouchers for freshmen. The decision will be made in the near future. At the beginning of September the minister Dziedziczak, the director and the deputy director of the Foundation “Aid to Poles in the East” will arrive in Lithuania. Meetings with the first-class students, the teachers and the parents will be organized. I suppose that during these meetings, in Vilnius and Soleczniki, they will inform about how they plan to use the money – told Wilnoteka Józef Kwiatkowski.

In the new school year, 1101 students will start learning in Polish schools in Lithuania. That is slightly more than in 2015 – last year there was 1018 first-class students.

The Catholic Youth Days: a Party with God

Polish Discussion Club at March of Remembrance in Molėtai