Portal pl.delfi.lt – as a weekly 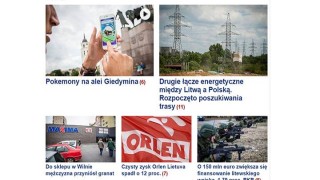 There has been no new information appearing on the pl.delfi.lt site since 22th of July. En editor Ryszard Rotkiewicz quit. The management of the portal informed that the Polish version will not be fully closed, it will not be however edited on a regular basis. From now on, information in Polish language will be addressed to readers who do not know neither Lithuanian nor Russian.

‘’For four years, Delfi has been investing in a portal run in Polish language. We see however  that most representatives of this national minority, which lives in Lithuania, read news mostly in Russian and Lithuanian as there as many more information in these languages than there are in Polish. That is why, we made a decision to reorganize the portal and focus on both foreign readers and qualified renewal of information once a week. We are not planning to close a site permanently’’- Delfi’s president Vytautas Benokraitis informed in his comment sent to Wilnoteka through an editor in chief Monika Garbačiauskaitė-Budrienė.

As the editor in chief said, she found out about the changes regarding the Polish project only this week, after getting back from her vacation.

Delfi group dates back to 1999 and belongs to Estonian Ekspress Grupp. It has information services in Lithuania, Latvia, Estonia and a portal in Russian language in Ukraine. In Lithuania, it runs an internet service in Lithuanian, English, Russian and Polish.

Its Polish version was formed in 2012. Monika Garbačiauskaitė-Budrienė  said then that „The Poles are the biggest minority in Lithuania and media operating in Polish language are currently shredded and are not able to attract as many users as Delfi’’. A portal in Polish language was supposed to be a counterbalance to media existing in Lithuania but financially supported by Lithuanian self-governments, which are ruled by AWPL ( currently AWPL-ZChR) or Polish institutions like the ‘’Foundation Aid to Poles in the East’’.

Tomaszewski: Party doesn’t want to lose its position in the European Parliament

Robert Tworogal – a Pole from Vilnius at the Rio Olympics

“There are many social processes that cannot be steered by law, they cannot be shaped from…
Znad Wilii March 21, 2018

Expose of Czaputowicz: We note progress in matters of the rights of the Polish minority in…