Robert Tworogal – a Pole from Vilnius at the Rio Olympics 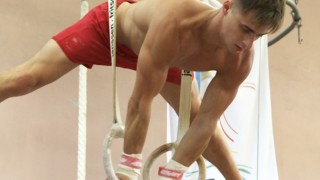 22-year-old Robert Tworogal from Vilnius, graduate of the Konarski School in Vilnius, is the only gymnast who trains the all-round gymnastics and will represent Lithuania at the 31st Summer Olympic Games, which will start on 5th August in Rio de Janeiro. The first deciders for Robert will take place on 6th August. The athlete assured that he is prepared to achieve the maximal score and that he will do his best.

“I had to put a lot of effort into the preparations. I was training for the Olympics and world championship for the whole year. My goal is to achieve the maximal score, to show what I can do” – said Robert Tworogal during the conversation with Wilnoteka. Unfortunately, while preparing for the most important games, he could not escape the injuries, what might influence the final results.

The coach Jevgenij Izmodenov  says that Robert has a big potential. Sadly, in Lithuania we do not have a suitable sports facility so he doesn’t have a chance to achieve world level results. Robert Tworogal practices very often in other countries, including Belarus, Latvia, Italy.

Robert Tworogal started gymnastics when he was five years old. His mother, Maria Tworogal, decided that an active and energetic boy who does not want to attend the preschool should do sports. There was a sports school nearby so she signed him up for the classes. As Robert mentioned during the conversation with Wilnoteka, he was fascinated by the all-round gymnastics from the very beginning. However, there were moments of doubt in his life when he wanted to quit sports. Eventually, he realized that sport is everything he has and that he likes it. That satisfies him. In the future, after the ending of his sports career he is planning to become a coach.

Robert Tworgal is the only Pole among the national olympic team of Lithuania. A gymnast, Agata Vostruchovaitė, a student of the Mickiewicz Junior High School, who also has a pretty long list of achievements, is not a part of the national team because of her age. Her 16th birthday is to come in December 2016.

Portal pl.delfi.lt – as a weekly