Ensemble “Zgoda” in the Final of “Duokim garo!” 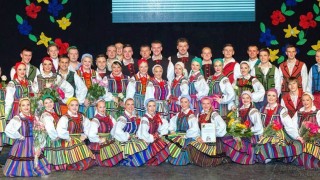 This year’s edition of the TV music talent show “Duokim garo!” [Let’s Rock!], which is just drawing to an end, has been exceptional. For the first time in the programme, national minorities’ ensembles have performed alongside Lithuanian folk groups. The Polish ensembles which had the opportunity to be on Lithuanian TV were “Wilia”, “Wilenka”, “Turgielanka”, “Solczanie”, “Zgoda”. It is the Folk Dance Ensemble (ZTL) “Zgoda” from Rudamina that is going to represent Poles in the final of “Duokim garo!”.

The one that is going to compete with “Zgoda” in this folk battle is the Russian Folk Ensemble “Arinuszka” from Vilnius. The results deciding on the two groups that will perform in the final were settled by the audience votes from previous episodes of the show.

The ZTL “Zgoda” was formed in Rudamina near Vilnius in 1988 by Henryk Kasperowicz, a Polish folk culture enthusiast, who has performed the function of the ensemble’s head and choreographer to this day. The aim of the group’s activity is to promote the Polish folk heritage. After its first concerts, the ensemble attracted the attention of the audience with its originality, high artistic level, and verve. Today the group comprises of more than a hundred young artists, who develop their talent and passion for dance, singing, and folk music in three sections: dance, vocal, and instrumental.

In its repertoire “Zgoda” has Polish national and regional dances, shows, as well as short theatrical performances presenting the Vilnian land’s folklore, “Jarmark kaziukowy”, “Zabawy nad Wilią”. In 2009 the group prepared the first Polish rock opera in Lithuania, modernising fragments of Adam Mickiewicz’s poem “Sir Thaddeus”. The premiere took place within the celebration of the 20th anniversary of the ensemble’s artistic activity. “Zgoda” has been faithful to its original idea for years – it popularises songs, dances, and melodies of other nations, i.e. of the Lithuanian, Jewish, and Belarusian folklore, among others.

This time the live programme “Duokim garo!” will exceptionally take place on Thursday, 23th June. The transmission is due to begin at 9.00 p.m. on LRT Televizija.

The Folk Dance Ensemble “Zgoda” counts on its fans’ votes!

High-school examination from Polish language will earn you additional points