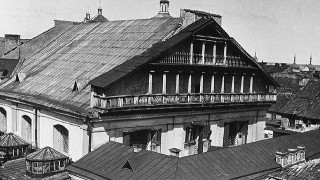 Today, by Ulica Żydowska in Vilnius, there are a kindergarten and playground. Not everyone who lives in this corner of Vilnius knows that up to 1948 the unique Old Synagogue, also known as Great, had stood here. It meant the same to the Jewish culture and religion as the Vatican City does to Catholics. Currently, a group of archeologists from the USA, Canada, Israel, and Lithuania is conducting a detailed research at the site, looking for remnants of the Great Synagogue.

At the initial stage of works, half a metre of the ground was removed and few decorative fragments of the buildings belonging to the architectural ensemble of the Old Synagogue – pieces of bricks, tiles, chips of glass – were found. The scholars are going to dig still a metre more, and then, with a special technique of scanning the ground, to establish the exact location of foundations and other details.

The archeologists are accompanied by an American film crew from the “Nova” television. In 2017 they are going to make a documentary on the Great Synagogue and archeological works conducted currently in Vilnius.

“The Great Synagogue was one of the biggest Jewish religious institutions not only in Lithuania but in whole East Europe. Pilgrims from all around the world used to come to that place. It was like the Vatican City. If the Vatican City were demolished, banned, wouldn’t you like somebody to find out what it looked like?” Richard Freund, one of the leaders of the group of scholars, told the BNS Agency.

Professor of the University of Hartford in the USA Richard Freud has used non-invasive method of archeological research – radars for ground penetration and electrical resistivity tomography – for over 20 years. These techniques facilitate accurate specification of buildings’ remnants located underground without the necessity of pulling down the existing structures.

The Old Synagogue in Vilnius, the main synagogue of the Orthodox Jewish community in Vilnius, was built at Ulica Żydowska where an older synagogue from brick stood. Erected between 1630 and 1633, it represents the Baroque and Renaissance style.

In 1886 Matiyahu Straszun established the famous library, within which an archive assembling materials concerning the history of Jews in Polish functioned. The library and archive were located in a multi-storeyed building erected by the synagogue in 1892. In 1927 the Matiyahu Straszun Jewish Public Library in Vilnius possessed approximately 19,000 volumes.

The synagogue was demolished partly by Hitlerites during World War II, and then destroyed completely by the Soviet army.

Ensemble “Zgoda” in the Final of “Duokim garo!”