Soleczniki win at the Polish Community Olympics as well 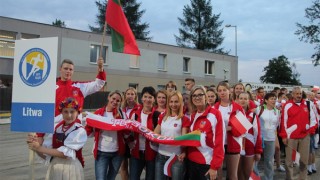 41 gold, 32 silver, and 41 bronze medals have arrived on Sunday to the Soleczniki district from the XVII World Summer Polish Community Olympics “Silesia 2015” which took place on 2nd-9th August this year.

World Polish Community Olympics is the biggest sport event of the Polish community. The participants are Poles who permanently live outside Poland, and they represent the countries in which they live. This year’s event host was Silesia, and the sporting part of the Olympics took place in Katowice and in the urban agglomeration of the Katowice area.

A team of 60 people from the Soleczniki district also participated in the most prestigious games among the Polish community and Poles living abroad. The representation of Lithuania consisted of 157 athletes and it turned out to be one of the most numerous teams out of over 1000 participants from 27 countries. People from the Soleczniki district competed for a medal in every sport discipline presented excluding bridge and golf.

“I would like to stress the exceptional solidarity and activity of our team. We virtually took part in every game, getting the second best result in terms of the number of medals, which I consider a huge achievement. We knew that our biggest rivals would still be Belarussians and Czechs. This time, we were better than the Czechs, unfortunately, we lost with our closest neighbours. Never mind, there will be next Olympics” – says the captain of the Soleczniki district team Gienadij Baranowicz.

For a good result in the XVII World Summer Polish Community Olympics, the captain of the Soleczniki district team Gienadij Baranowicz was rewarded the President of the Republic of Poland Cup.