Artur Górski: We we will fight for full rights of the Polish minority in Lithuania 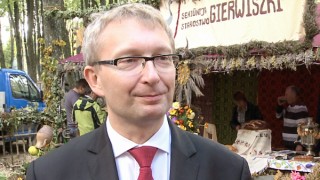 The Deputy to the Sejm of the Republic of Poland Artur Górski who is known for his commitment to protection of rights of the Polish minority has recently received an answer to his question concerning plans of closure and change of staus of Polish high schools in Vilnius and in the Vilnius Region by Lithuanian authorities. In the interview with Wilnoteka he expresses his opinion on Polish authorities’ current and future policy on Polish minority in Lithuania and on Lithuanian authorities.

The Deputy of the Sejm Artur Górski has been committed to protection of rights of the Polish minority in Lithuania for years. One of his latest initiative has been a question addressed to the Ministry of Education. That inquire was with regard to plans of closure and change of staus of Polish high schools in Vilnius and in the Vilnius Region by Lithuanian authorities.

In the response to his question which he has recently received, it is stated that the Ministry shares the concerns expressed by the Polish minority in Lithuania concerning long-term effects of reforms implemented by Lithuania. Consequently, the Ministry finds the Polish-Lithuanian Team of Education Experts and Representatives of Minorities’ work ineffective. That team was appointed by Prime Ministers of the Republic of Poland and the Republic of Lithuania in 2011.

The Deputy of the Sejm Artur Górski is certain that Polish government’s policy on protection of rights of national minorities in Lithuania currently is ineffective and the government’s commitment is insufficient. “The Polish government, which is headed by Civic Platform, makes many mistakes in its policy on Polish minority in Lithuania and towards Lithuanian government. The Polish government also neglects those issues”, says Górski in the interview with Wilnoteka. “Firstly, Polish minority in the East, in particular in Lithuania, is not the priority of the current cabinet and therefore material and political support for Poles living there is limited. Furthermore, problems of the Polish minority are not going to be successfully solved due to the lack of the determination of the government in the matter”, says Górski. “Secondly, the government does not consult his policy with real leaders of the national minority whose opinions are often deemed egoistic and separatist. Consequently, the government’s policy bears no relation to reality. Moreover, that policy does not live up to exceptions and hopes of Poles living in Lithuania. Thirdly, the help offered to the Polish minority is often not a disinterested one because it aims to create new environments and leaders who do not represent the real interests of Poles living in Lithuania but Lithuanian ones. As a result of such a state of affairs, the minority is weakened and there are internal disputes among its members. That has led to the situation in which the elite of the Polish minority no longer counts on Poland because they have realized that they can rely only on themselves” adds Górski.

The Deputy to the Sejm hopes that political changes in Poland will positively influence policy of Polish authorities towards Poles living in Lithuania. His critic of the current government signifies that he thinks that the new Polish President will increase Poland’s involvement in protection of interests of Polish minority in Lithuania:

“The victory of the President of the Republic of Poland Andrzej Duda and his declarations concerning Polonia (the Polish Diaspora) and Poles living in the East show that that issue will be one of the priorities during Duda’s Presidency. Moreover, it will be important for the government headed by PiS (Law and Justice) if such a government is formed after parliamentary elections. Duda and politicians of PiS treat Polish minority in Lithuania as an integral and important part of Polish nation which requires support. In our community there is a strong solidarity with all Poles around the world and there is a great determination to break off an existing indolence of Civic Platform’s governance. Such a task will not be an unpleasant chore and burden but it will be a challenge based on a moral obligation. Consequently, it may be expected that new efforts will be made in order to restore full rights of the Polish Minority in Lithuania“.

A full text of the response of the Ministry of Education to Górski’s question concerning Polish education in Lithuania is published below.

The response of the Ministry of Education to The Deputy to the Sejm of the Republic of Poland Artur Górski’s question concerning plans of closure and change of staus of Polish high schools in Vilnius and in the Vilnius Region by Lithuanian authorities.

With regard to Artur Górski’s question (nr K7INT32256) I kindly explain:

The Ministry of Education shares the Polish minority in Lithuania’s concerns about long-term effects of the reform implemented by Lithuania. Local governments of regions in which there are schools with the Polish language of instruction in the Vilnius Region are the most reliable guarantors of continued existence of those schools. The Polish authority have been seeking in every Polish-Lithuanian contacts to achieve a subjective treatment for them.

The Ministry of Education has a regular contact with representatives of the Association of Teachers from Polish Schools in Lithuania “Educational Society” (Stowarzyszenie Nauczycieli Szkół Polskich na Litwie “Macierz Szkolna”). According to information given by the Association, there are 72 Polish schools with the Polish language of instruction and there are 20 subsidiaries in Lithuania in the academic year of 2014/2015. 11 884 attend such schools. 2 263 teachers are employed.

After protests of the Polish community in Lithuania against the provisions of the amendment of the Act on Education of the Republic of Lithuania, Prime Ministers of the Republic of Poland and the Republic of Lithuania appointed the Polish-Lithuanian Team of Education Experts and Representatives of Minorities in 2011. The experts have had five meetings. The main goal of Polish negotiations was to induce Lithuanian initiative resulting in changes in the Act on Education and executive acts which would prevent any threats related to functioning of schools with the Polish language of instruction. Final and common communication was not signed due to divergence of views. Lithuania was not willing to change the provisions of the Act despite propositions issued by Poland. Lithuania was willing only to adopt partial solutions on the level of regulations cushioning implementation of some provisions of the Act.

What was important in that matter was the fact that Lithuania agreed to change criteria of assessment of matriculation examination in Lithuanian (egzamin maturalny) taken by students who belong to national minorities. Lithuania also agreed to establish by the Ministry of Education a working group whose tasks included realization of provisions of legal acts on education of national minorities and preparation of subsequent policy on education of national minorities. The working group was composed of representatives of particular national minorities. Thirdly, Lithuania allowed to reduce the minimal number of students from 10 to 7 in grades XI-XII which is particularly important if high schools with the Polish language of instruction are to continue to function. Partial solutions achieved by the Team are important for schools with the Polish language of instruction in Lithuania but they are insufficient.