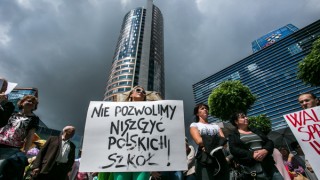 Parents of students attending Sz. Konarski High School are going to appeal to the court about the matter of the capitol city council’s decision to degrade the school to the status of an elementary school. The communities of other reorganised schools have the same intents. On 29th July the City of Vilnius Council decided by 25 votes to make nine high schools in Vilnius, including two with Polish as the language of instruction, start functioning as elementary schools, beginning with the new school year. 14 councillors were voting against the proposal, 2 abstained from voting.

“Of course we will appeal against the decision – there is no other way. We are aware that our school will be reorganised at some point because it is impossible to keep two Polish gymnasiums in the same part of the city. But why the hurry? If the law on education allows moving the reorganisation up to two years, then why couldn’t they let the 11 and 12 grade students finish their education in their schools?” – Dariusz Żybort, whose children attend Sz. Konarski High School, told Wilnoteka.

On behalf of students and parents of the Konarski school, Dariusz Żybort took the floor at the local government Council session during which the project of school reorganisation was discussed. He was also talking about this matter with the mayor Remigius Šimašius in person. “You can say whatever you want on the rostrum, you can even declaim poems – I doubt anyone listened to what we had to say because they already knew how they would vote. When it comes to our school, I was telling the Mayor about the fact that if that particular concept of school network had been accepted: “Konarski” becomes an elementary school, and our students continue education in A. Mickiewicz Gymnasium, then let us stick to that concept. However, we know that the Mickiewicz school appealed to the court about the Council’s decision against forming grade 5. Thus, grade 5, as it was presumed, will not attend our school. In such a situation it would be logical to allow our students from grades 11 and 12 to finish education in our school. It seems like the city authorities make everything to start a quarrel between the schools, parents, and the whole Polish community” – said Dariusz Żybort.

Wilnoteka’s interlocutor did not hide his disappointment with the attitude of the city authorities, and, individually, of the Mayor Remigijus Šimašius: “At the mayoral run-off, many Poles supported Šimašius hoping for positive changes in the city, and for him to be the link between the Polish and Lithuanian communities. I don’t know if it’s someone advising him so inauspiciously but his recent moves as a politician has made him lose his authority. In the Polish community, he will have the same label as his part-colleague, former Minister of Education Steponavičius. They couldn’t just sit normally, talk, and find a consensual solution. And now all of that was settled following the ‘we know better, we’ll do it our way, and you’ll be happy’ rule. This is forcing people to be happy.”

Both the students of reorganised schools and their parents are confused as the school year starts in a month, and there is still no information on what school the children are to attend on 1st Septmeber. The city authorities suggest a solution which sounds neither logical nor safe for the children: students of grades 11 and 12, for example those from the Konarski high school, will still be attending their school, but officially, they will be students of A. Mickiewicz Gymnasium, while their teachers will be hired for a couple of hour in the Mickiewicz Gymnasium as well. In this situation, who would be responsible for the students’ safety and health – the principal of the Konarski school or the Mickiewicz Gymnasium? Furthermore, students have signed two-year-long contracts with the school, and only parts of the contract, the student and the school, can cancel it. However, if the reorganisation issue will be taken to court, and it will, then the court can decide to counter the local government Council’s decision. In such a situation, everything will stay as it is until the court examines the case and makes a decision.

“The case will be taken to court but, in fact, it is not convenient for our community nor for the city authorities, or individually for Šimašius. Maybe before AWPL was in the ruling coalition, the issues of reorganisation among our community should have been coordinated and arranged in the way we wanted it to be. Now, however, it has been done without us. Reforms are needed but they have to happen through dialogue” – Dariusz Żybort believes.

There was no dialogue.

Zbigniew Balcewicz: “Lelewel” in the face of eviction. Difficult questions without answers (1)