Decision has been made: there will be fewer Polish secondary schools in Vilnius 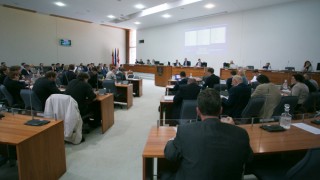 Neither appeals of students and parents nor the reform`s opponents` arguments, have convinced the councilors and the Vilnius Municipal Council with the majority of votes passed a resolution approving transformation of 9 secondary schools into primary schools. Schools with Russian as the language of instruction: Ateities, Senamiesčio, Saulėtekio, Centro, Aleksandro Puškino and Levo Karsavino, the Lithuanian Fabijoniškių School, the Polish-Russian Lazdynai School, and the Polish Szymon Konarski School are not provided with an opportunity of acquiring the status of a gymnasium.

Two weeks ago the municipial council made a decision concerning the oldest Polish school in Vilnius: the Joachim Lelewel Secondary School will be moved from Antakalnis to Žirmūnai in September 2016. After the change of placement, it will be able to claim the status of a gymnasium.

During the same meeting was also to be made a decision about the reorganization of another 9 schools in Vilnius. One vote happened to be decisive and the inescapable was postponed for two weeks. The time between the meetings was supposed to be spent on informing the communities of the involved schools with the planned changes. As it came out, after two weeks the council did not collect opinions from all the schools. The AWPL (Electoral Action of Poles in Lithuania) councillors proposed not proceeding the project of a resolution concerning the reorganization of the schools; however, the council`s majority voted against this proposition.

During the council proceedings the concerned schools` representatives gave speeches expressing their opinion on the issue. Parents and students asked the city authority not to make decisions which are “biased, detrimental, and violating the existing law regulations” one month before the beginning of a new school year. They also reminded the council that according to the amendments to the Act on Education passed by the Parliament, the deadline for implementing the reform was extended to the 1st September 2017. It means that schools, which has not yet gone through the process of the accreditation of the secondary education programme and has not acquired the status of a gymnasium, have still 2 more years to do so. “Only in this critical situation have I understood the meaning of the words: ‘School is our second home’” – says Marek Jodko, the Szymon Konarski School student, who spoke in the name of his peers.

The Szymon Konarski and Lazdynai Polish schools wanted to establish artistic education programmes. However, they were not provided with the opportunity to acquire the status of a gymnasium. Liberals and conservatives governing Vilnius decided that there is no point in delaying the reform. These two schools together with seven Russian and Lithuanian schools will function as primary schools since the 1st September 2015.

On the basis of: own info.

Translated by Julia Siepak within the framework of a traineeship programme of the European Foundation of Human Rights, www.efhr.eu.