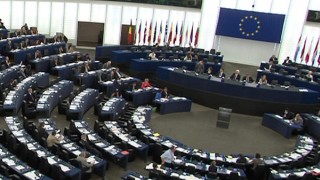 In June 2015, 60 MEPs from 13 countries, representing various political factions, wrote a declaration to the Prime Minister of Lithuania about respectability for the rights of national minorities in Lithuania. The declaration concerns, inter alia, the most pressing problem – the situation of national minorities’ schools. Algirdas Butkevičius sent a letter to the Ministry of Education and Science (and some more institutions). The Lithuania’s official response to this statement at the moment does not exist at all.

“As the Members of the European Parliament who guard civil rights and liberties, we observe, with great concern, the situation in Lithuania and express our firm opposition to the restriction of national minorities’ rights, especially in the field of education, which should be under the special protection of state institutions. The attempt to several schools’ close-down, especially the schools with minority language, including Polish, is unacceptable from the European point of view and is incompatible with the spirit of community law. The Treaty of Lisbon puts a clear emphasis on the promotion of multilingualism, multiculturalism and multi-ethnicity. In addition, the Framework Convention for the

Protection of National Minorities and the European Charter for Regional or Minority Languages gives special support to the issue of the national and ethnic minorities’ education. Lithuania, as a member of the European Union, in the first place should apply European standards in the field of protection of national minorities’s rights and should stop actions which appear as discrimination. We urge the Government of the Republic of Lithuania to enhance the legal protection of all minorities and cease any efforts to eradicate educational establishments with Polish language” – says the text of the statement which was directed to the head of the Lithuanian government, Algirdas Butkevicius. Prime Minister sent a letter on to other state institutions, including the Ministry of Education and Science of Lithuania.

As the daily newspaper “Lietuvos Rytas” wrote, the situation concerning the Polish schools in Lithuania was recently the issue of the Ambassador of Lithuania in Poland, Šarūnas Adomavičius, who had to excuse himself. From unofficial information it follows that the diplomat was summoned to the Polish Foreign Ministry, where he heard the charges for the current reorganisation of the Polish schools in Lithuania. An anonymous interlocutor of the journal suggests that a meeting was held with the help of the Electoral Action of Poles in Lithuania, because “the part of the charges is against to what the EAPL’s activists fight for.”

The Seimas of the Republic of Lithuania, during the last meeting of the spring session, postponed for two years the deadline of the reform shifting the network of schools. Schools that had not managed to fulfil the accreditation of secondary education program, gained time to obtain the status of high school. The truth is the final decision depends on the local government, in whose area there is a particular school.

Another discussed by the Poles living in Lithuania problem is the non-Lithuanian spelling of names. In defiance of the earlier announcements, during the spring session of the Lithuanian Parliament, it was decided not to vote on the relevant legal act.

The deputy Chairman of the Seimas of the Republic of Lithuania, Gediminas Kirkilas, who is one of the authors of the law on original spelling of names, admitted that EAPL uses the situation, so if Lithuania do not dare to take a decision on the spelling of surnames, it will lost another chance to normalise relations with Poland. “Yes, we are only treading water, while EAPL does not stand still. And why would it wait? After all, it is what they exist for” – said G. Kirkilas. Vice-Chairman of the Seimas. He also assured that during the autumn report he will propose the draft law on the spelling of names, but he is not certain about its success: “There are, theoretically, enough voices, but the situation is fragile.”

Valdas Benkunskas: Schools in Vilnius should be rearranged now, not in two years’ time.

Parents take matters into their own hands. Protest in front of the Presidential Palace.