Lithuanian linguists: “No” to original spelling of surnames 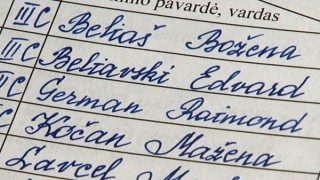 The member of parliament, Gediminas Kirkilas, one of the authors of the draft law on the spelling of names, announced that the parliament will return once again to the State Lithuanian Language Commission for clarification. “The Commission explained that we did not formulate our question, as it should have been. We will have to address to the committee an accompanying proposal, asking about our citizens, with archival documents, such as religious, confirming the original spelling” – said G. Kirkilas.

Daiva Vaišnienė, the chairwoman of the Commission of the Lithuanian Language declared that, nothing has been stated and Commission didn’t change their minds.  There was no new discussion on this topic and “Only few wordings were changed” – she explained.

Radczenko: The decision of State Commission of the Lithuanian Language is illogical and discriminating