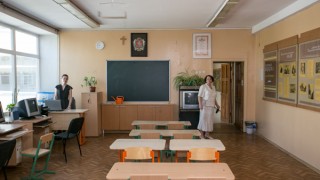 Today all classes in Polish schools in Vilnius were cancelled. The parents decided that their children will not go to school. This is how school communities protested against the reorganization of schools. On Wednesday the classrooms in “Syrokomlówka” were empty; the school will lose the status of high school in autumn 2015.

The representatives of the Parents of Polish Schools’ in Lithuania Forum (Forum Rodziców Szkół Polskich na Litwie) announced the protest during a meeting in front of the seat of government on Monday.

In Wednesday morning, in Dominican Church of the Holy Spirit in Vilnius there was a mass for protection and development of Polish education. The parents, students of Vilnius schools and politicians from Electoral Action of Poles in Lithuania attended the mass.

It is the time of final exams in high schools. According to the current schedule of exams, in the day of the exam outsiders are not allowed to be present in a school appointed as the exam centre. Thus, only those schools where there was no exam were able to participate in the protest.

“We have been informed that the action took place in every school in danger and in the schools who support them. Obviously, not all students attended the mass – their presence was up to their parents’ decision. We are happy that there is already a response to our protests: the minister (Minister of Education and Science Audronė Pitrėnienė <ed.>) visited the “Syrokomlówka” today.

Up to now our requests have been ignored by the authorities, we did not have any contact with them. The Minister wanted to talk about problems of Syrokomla School, however we took the chance to present the situation of all schools in danger, both Polish and Russian ones, not only in Vilnius but also in Vilnius Municipality and Trakai District Municipality” – told Renata Cytacka, the representative of the Parents’ of Polish Schools in Lithuania Forum.

On the basis of: Inf.wł.

A few thoughts about equality which starts to discriminate…