Poles in local governments in Lithuania: without major changes? 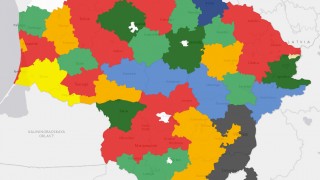 Past election map of Lithuania - flash like probably never before... Fot. vrk.lt

The next local government elections, for the first time involving electoral committees and the first direct elections for the position of mayor, open a new chapter in the history of the Lithuanian democracy and self-governance. Poles living in the Vilnius Region once again proved their civic attitude and political solidarity – the Electoral Action of Poles in Lithuania, in most local governments running in coalition with the Russian Alliance under the name of “Tomaszewski’s Bloc”, did even better than four years ago: they won 7,76% of support in the entire Lithuania (in 2011 – 6,5%), which was the 6th place among the running parties and 70 seats (in 2011 – 65). More than 90 thousand people voted for them (four years ago – 74,5 thousand). More than ever Poles run from the tickets of other parties (especially in the Vilnius Region), but only few managed to get the seat in the council. Generally, in the Lithuanian local government council there are going to be 60 Polish councilors (35 males and 25 females), 20 Russian councilors (16 males and 4 females), 3 Belarusian councilors (2 males and a female), 3 male Ukrainian councillors, and also a male Tatar councillor, a male Samogitian councillor, and a male English councillor! Lithuanians constitute 66,7% of the all councillors, Poles constitute 4,05% of the all councillors, and 27,3% of the councillors did not specify their nationalities. The average age of the councillors elected last Sunday is 50,9 years and it is lower than before – during the term 2011-2015 it was 54,8 years.

In the Vilnius and Šalčininkai Districts, the current mayors Maria Rekść and Zdzisław Palewicz stayed in power right after the first round of the direct elections for the position of mayor. The Electoral Action also maintained the status quo in the local government councils of the Vilnius and Šalčininkai Districts. Importantly, Zdzisław Palewicz got the best result in the whole country: as much as 77,5% of the electorate voted for him. In the Council of the Šalčininkai District Local Government, the Electoral Action of Poles in Lithuania will maintain the absolute majority and govern independently, despite the fact that they won one seat less: in 2011, “Tomaszewski’s Bloc” won 22 out of the 25 seats in the council; now, it won 21 seats (to be precise: 20 seats + the position of mayor). That one seat was taken by the Liberals’ Movement (until now, not present in the Council of the Šalčininkai District Local Government); the same results were also achieved by the Labour Party (2 seats) and social democrats (1 seat).

The 60% of the electorate in the Vilnius District voted for the current mayor Maria Rekść, similarly like in the case of the ticket of the Electoral Action of Poles in Lithuania and the Russian Alliance “Tomaszewski’s Bloc” coalition (although, there were more than a thousand votes more for the ticket than for the mayor). Four years ago, the results of the Polish party was slightly better (64,72%), but the voter turnout was also higher then (53% in 2011 in comparison with 51% in 2015). Meantime, the number of councillors has also risen: the Electoral Action of Poles in Lithuania had 19 out of 27 seats; now they will have 21 out of 31 seats (to be precise: 20 seats + the position of mayor).

Given the facts, since both in the Šalčininkai and Vilnius Districts, the councillors from the Polish Party has held supreme authority since almost 20 years, which causes not only stability, but also a certain routine and decrease of the tempo of activities, the results of the Electoral Action of Poles in Lithuania can be considered good.

In Vilnius, the Polish party lost one seat in comparison with the last term, despite the fact that it noticed a statistical support growth: in 2011, 29 thousand votes guaranteed the 15% of support and 11 out of 51 seats in the City Council; this year, more than 38 thousand people voted for the “Tomaszewski’s Bloc”, which guaranteed 17,19% of support and the same second place and only 10 seats. The higher voter turnout was the factor that decided about it: 50,5% in comparison with 44% in 2011. Waldemar Tomaszewski lacked 1,11% (about 2500 votes) to proceed to the second round of voting; if he managed to repeat the result from the presidential election from the last year – 45,4 thousand votes of support (in comparison with 37,5 thousand last Sunday) – he would beat the current mayor Artūras Zuokas (less than 40 thousand votes, 18,36% of support).

During the second round of voting, Zuokas (currently being in coalition with the Electoral Action of Poles in Lithuania in the City Council) is going to fight with the revelation of these elections. Unquestionably, Remigijus Šimašius from the Liberals’ Movement won the first round of voting individually (34,5% of support, over 75 thousand votes) and as a team. 26,34% of the Vilnius residents voted for the Liberals’ Movement, but it is “only” 58,5 thousand people, i.e. almost one in four, voting for Šimašius to be the mayor, did not vote for his liberal party at the same time. It is not a secret that the politician run an active campaign and became extremely popular among young Russians and Poles as well. The Liberals’ Movement has already declared to enter into a coalition with the right-wing Homeland Union and promised to introduce the change of authority in the Vilnius City Council; however, to gain the majority of liberals (15 seats, four years ago – zero!) and conservatives (8 seats, in 2011 – 10), even if Šimašius wins in the second round of voting, he will miss 2 votes, therefore, there cannot be a situation without the third coalition partner. Šimašius said, however, that his party is willing to cooperate with all parties in the council, except for the parties of Waldemar Tomaszewski and Arturas Zuokas.

Next districts, where Poles are not the majority, but have good representation and recently have been in the ruling coalition, are Trakai and Švenčionys, Unfortunately, in both districts Poles did not manage to qualify to the second round of voting for the position of mayor. In Trakai, Maria Pucz from the Electoral Action of Poles in Lithuania (16,57% of support) was definitely behind the representatives of the Liberals’ Movement (Edita Rudelienė – 30,65% of support) and social democrats (Vytautas Zalieckas – 26,23%); whereas in Švenčionys, the representative of the Electoral Action of Poles in Lithuania, Zbigniew Jedziński, took only the 4th place, but he lost with the second Rimantas Klipčius (Liberals’ Movement) only for 250 votes. Vytautas Vigelis will probably remain to be the mayor there (the Labour Party, 30,15% of support in the first round of voting). In the Švenčionys District council, the Polish-Russian coalition strengthened its position – instead of 4 (13,24% of support in 2011) out of 25 seats in the council, it will have 5 seats (16,68% of support in 2015) – move from the third place to the second. Also, in the Trakai District council, “Tomaszewski’s Bloc” kept 5 out of 25 seats and had only slightly worse result than in 2011, but it slipped from the second to the third place on the list of parties taking part in the local government elections.

The Electoral Action of Poles in Lithuania also lost one out of two seats in the 21-seat council of the Širvintos District. The results were even slightly better there than four years ago, however, the higher voter turnout and unfovourable balance of power after the elections decided about the loss. In the coalition with Russians, the Polish party improved its results in Visaginas – it is going to have 3 instead of 2 out of 25 seats in the council there. Also, in the third biggest city in Lithuania – Klaipėda, where are not so many Poles, but where are many members of the Russian minority, “Tomaszewski’s Bloc” achieved much better results (almost 12% of support and nearly 6 thousand votes in comparison with 8,40% and nearly 4 thousand votes in 2011), then it will have 4 instead of 3 out of 31 seats in the city council (the leader of the Russian Alliance, Irina Rozova, also marginally lost a seat there during the second round of voting for the position of mayor).

In Druskininkai, Zarasai and Elektrėnai, the Polish-Russian coalition, like four years ago, did not win any seat. In two weeks’ time, we are also not going to see Poles during the second round of voting for the position of mayor and parliamentary by-elections. Fighting for the seat in Parliament in a single-member Vilnius constituency Žirmūnai, Renata Cytacka took the third place (joint with Algis Čaplikas) and dropped out of the further struggle.

Despite the lack of candidates in the second round of voting, the Polish electorate can determine about who is going to be the mayor of Vilnius, Trakai or Švenčionys. The leader of the Electoral Action of Poles in Lithuania and the Member of the European Parliament, Waldemar Tomaszewski, has already declared that his party will not provide an official support to any of the candidates.

“Poles have freedom in their blood.” Balcewicz, Okińczyc and Rudzys in the Polish Debate Club

The local government of Vilnius finalized the first step in the digitalization of personal data from…
Znad Wilii September 19, 2019