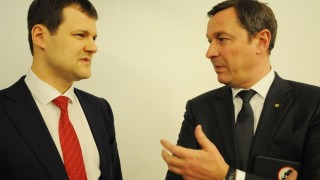 The upcoming municipal elections, especially the first direct election of Mayors, stimulate heated discussions in Lithuania. The struggle for the position of the capital leader is indeed the most thrilling one. As much as 12 candidates declared their intention to govern the biggest and most important city in the country. The current Mayor Artūras Zuokas, is the leader of the pre-election surveys. Among his opponents are the former Justice Minister and the Member of Parliament from the Liberal Party Remigijus Šimašius, Member of the European Parliament and the leader of Electoral Action of Poles in Lithuania Waldemar Tomaszewski, the conservatist Mykolas Majauskas, and the social democrat Gintautas Paluckas. The two candidates: Artūras Zuokas and Gintautas Paluckas were the guests of the Polish Debate Club.

The Polish Debate Club also invited Mykolas Majauskas, Waldemar Tomaszewski and Remigijus Šimašius to a meeting and discussion. Tomaszewski and Šimašius refused to come because the date was inconvenient for them. Majauskas informed about his absence at the last moment, which was unfortunate since there could have been quite a lot of questions for him.

Mykolas Majauskas “became famous” during the Christmas time. His political campaign staff prepared Christmas cards for the citizens of the capital, which the Polish language versions contained the city name Vilnius. A card was added with a packet of Christmas hay. Such a “present” caused consternation among Poles living in Vilnius – they did not know whether to laugh or feel offended.

Artūras Zuokas, who is the chairman of the Lithuanian Liberty Alliance (Lietuvos laisvės sąjunga) intends to run for a third term as Mayor of Vilnius; therefore, he is well-known for the Vilnius residents. At the beginning of the meeting Artūras Zuokas pointed out that in the current ruling coalition in the capital his cooperation with AWPL (Electoral Action of Poles in Lithuania) has been good: “They are a good coalition partner. They keep their word.” As he said, AWPL like no other party pays much attention to education. He reminded about how the battle to preserve J. Lelewel’s High School – the oldest, post-war Polish school in the city – was fought. “If someone wanted to shut the school down, in which Jonas Basanavičius studied, I would oppose as well, hence when I got familiar with the history of the Lelewel’s school I supported the idea of preserving it” – he said.

Artūras Zuokas underlined, however, that there are issues which concern all residents of the city, despite their nationality, i.e. public transport, roads, renovations of schools and kindergartens, revitalisation of public space. And these issues will be of his major concern if he gets elected to the position of Mayor.

Gintautas Paluckas also fostered cooperation with Poles in the city council during the time when he was the head of the metropolitan administration. As Mayor he wants to develop the outskirts of the city in the first place. “Vilnius is developing differently in different areas. The centre of the city is in the spotlight, whereas other areas such as Šeškinė, Lazdynai, Karoliniškės or Naujoji Vilnia are not taken into consideration. The outskirts should be the target of investments. This is the focus of our campaign” – said Paluckas.

Artūras Zuokas and Gintautas Paluckas answered the questions of the participants of the discussion. The meeting took place in Vilnius University Institute of International Relations and Political Science. There were not only Poles in the room, but also Lithuanians – students and journalists. Of course, there were questions about Polish affairs; however, issues concerning all residents were raised more frequently.

The candidates for the position of Mayor were asked about their opinion on shutting down the schools of the ethnic minorities with the declining number of students. Artūras Zuokas admitted that there are problems with some schools, especially Russian ones. He claims that the economic logic stands behind the decision whether a school should be preserved or shut down. On the other hand, the local government has ways to preserve schools, for instance, by creating pre-school groups in them.

Obviously, there was the question about Vilnius one billion debt. “It is the question for the finance minister and the government. Unfortunately, self-government in Lithuania is not on par with, for instance, the neighbouring Poland or Latvia. In our country it is the government and the parliament that decide about everything. The city has as much money at its disposal as it is given from the government budget” – said A. Zuokas. The city collects only 48% of earnings from the personal income tax paid by the residents of Vilnius. The rest goes to the government budget. Vilnius authorities have strived to convince the government for years that the system of division of the government budget is unfair, and that the capital is treated as a “fund giver”. Artūras Zuokas talked about it during the meeting in the Polish Debate Club as well. His views were supported by Gintautas Paluckas, who added that in 2014 the government of the Social Democratic Party increased financing Vilnius by 6%.

Both candidates admitted that they oppose the idea of building the subway in Vilnius. They have different visions of developing the public transport, though. Artūras Zuokas would like to have private companies providing public transportation services in the city. The representative of the Social Democracy Gintautas Paluckas thinks that the public transport should remain the matter for the local government.

The candidates were also asked about their opinion on the information for tourists in the Polish language and the nationalists’ parade on the 11th of March. Artūras Zuokas assured that the information for tourists in Vilnius are given in a number of languages, including the Polish one. As far as the display windows and advertisements are concerned, they are regulated by specific legal documents. He claims that these are good solutions, thanks to which there are not as many chaotically and unaesthetically placed advertisements as, for instance, in Warsaw. Gintautas Paluckas said diplomatically that the issues of bilingualism are regulated on the national level. If he was Mayor, he would not allow nationalists to organise the parade. The current Mayor of Vilnius claims that statutorily the city authorities cannot prevent people from organising any parades.

Speakers were perplexed by one question: if they had money, what three monuments would they erect? After a moment of thought Artūras Zuokas said these would be a monument to Jonas Basanavičius, a monument on Lukiškės Square, and a monument to Vytautas (“the Great”). According to him, there should also be some modern sculptures, monuments without any particular figures on the pedestal making public spaces in the capital more beautiful. Gintautas Paluckas said that, since he graduated from IT studies, he would not venture to name any particular figures deserving a monument in Vilnius.

Ethnic and linguistic minorities under the protection of the European Parliament

The local government of Vilnius finalized the first step in the digitalization of personal data from…
Znad Wilii September 19, 2019