Dominika Wasilewska from ”Syrokomlówki” the best at the Lithuanian language 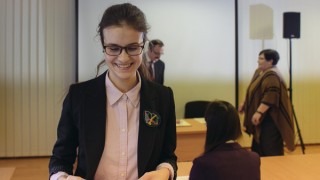 The Lithuanian language is not necessarily easy to learn. The dictation’s text, written by the participants of the 10th edition of ”The Best at the Lithuanian Language” and organized by the Association of Polish Schools’ Teachers in Lithuania “Macierz Szkolna” was rich in language traps. The best was Dominika Wasilewska, but even the winner made some mistakes.

The competition ”The Best at the Lithuanian Language” is particulary aimed at students from 10 grade. In the 10th edition 34 participants from Vilnius and its regions took part. The first prize was given to Dominika Wasilewska from ”Syrokomlówka” High School of Władysław Syrokomla in Vilnius, second prize went to her class friend Karolina Słotwińska, and third prize was given to Emilia Urbanowicz from Junior High School of John Paul II in Vilnius.

Laureats agreed that dictation was not easy. Few weeks ago, Karolina Słotwińska won similar competition at Polish language. As she said to Wilnoteka, both with her friend Dominika, they were preparing and repeating principles of written Lithuanian.

Emilia Urbanowicz admitted that if she took more time to read in Lithuanian, she would make less mistakes. Dominika, Karolina and Emilia assured they like to read both in Polish and Lithuanian, however more than school reading they prefer modern literature. ”In my family we read a lot. I see when my parents read and so do I reach for the book. I think that principles of writing are not sufficient- it is better and easier to memorize difficult words while reading”- said Dominika Wasilewska.

Teachers experts of the Lithuanian language: Romualdas Žemaitis from Adam Mickiewicz Junior High School in Vilnius and Marija Česonienė High School of Władysław Syrokomla in Vilnius, who were checking dictations admitted that text was difficult and could even cause problems among students from the Lithuanian schools. They added that it is sad to observe as level of correctness comes down about every year.

The winner of the competition made seven mistakes, the laureate of the second place-nine, whereas remaining works had unfortunately more than 10 mistakes.

According to Marija Česonienė the problem is that students are not interested in literature reading. While the they have no difficulty in spoken language, they encounter problems when they are asked to write down some more complex words. I think that teachers should explain the system and constantly repeat grammar rules, as long as they will finaly remember them by heart- says Česonienė.

Romualdas Žemaitis is a Lithuanian teacher and has 47 years of experience. Although he is a teacher of begginer classes by profession, for many years he works with older students. ”I’ve noticed that high school students have deficiencies in the implemented curriculm and thus I decided to carry out an experiment: I asked for a job in the begginer classes. Now I teach 7 grade as well, where students knowledge of the Lithuanian language is at the level of the 2nd or 3rd grade. The problem is that children from begginer classes instead of learning Lithuanian they are mostly having fun. Their learning process is not even graded” – said Romualdas Žemaitis.

Romuald Žemaitisa, claims that when it comes to teaching Lithuanian, only native speakers of this language should lecture in the non-Lithuanian schools. Nowadays, mostly these are Polish teachers after Lithuanian studies, who speak with children in Polish language during the break and translate the content of lesson into their mother tounge, making their live much more easier. In his opinion, instead students should make some efforts to find meaning of the unknow word or idiom.

It is also a fact that Lithuanian language teachers do not have access to good textbooks . Every teacher is dealing with the situation in his or her own way . “I’ve been working in school for 45 years already. During that time I’ve collected a wide range of teaching material and thus I don’t have to use any textbooks. While working with students I rely on my own materials only” – said the Lithuanian teacher from Adam Mickiewicz Junior High School in Vilnius. Students of Romuald Žemaitisa achieve good results when it comes to Lithuanian language on the Matura exam.

Marija Česonienė thinks that students indeed have motivation for learning, but the real problem lies in the Lithuanian education system. ”We are used to the situation, where pupils seek only pleasure in learning…Fun, active learning methods and lower discipline…Students take everything for granted, without greater efforts or work, expecting at the same time positive results. It cannot be done just like that, because first and foremost they need to learn how to study”- said to Wilnoteka Lithuanian teacher from High School of Władysław Syrokomla in Vilnius.

Music origin: Vilnius not only from the folklore is known

Walking down the Vilnius streets: Gucewicz, the great architect