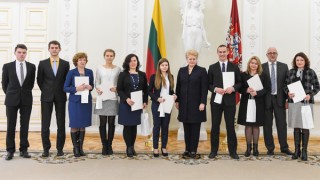 Winners of the Olympics XLIV Polish Language and Literature and their teachers during a meeting with Lithuanian President Dalia Grybauskaite, photo. president.lt/R. Dačkus

The Presidential Palace in Vilnius were invited students who in 2014 won international awards contests and competitions in question. By long-standing tradition, President Dalia Grybauskaite personally congratulated the students and their teachers. The prize winners were the Polish school students, winners of the Olympics XLIV Polish Language and Literature in Warsaw.

“Congratulating you, while we congratulate the whole generation that was born in a free Lithuania. Your achievements are no accident. It is the result of efforts inserted by you, careful work and talent. These results not only enjoy your family, teachers, classmates, but the entire Lithuania”- turning to the young people said Dalia Grybauskaite. The President thanked the teachers, who saw his talent and encouraged students to draw on the laurels of international competitions and contests.

In 2014, more than 80 students from Lithuania participated in international competitions and Olympiads concerned with history, music, philosophy, geography, natural sciences and other subjects. Representatives of Lithuania brought home 31 medals: 4 gold, 15 silver and 12 bronze.

Its share of the international success of young people from Lithuania were also students of Polish schools. Barbara Mikulewicz and Dominika Mieczkowska from Gymnasium name of John Paul II and Apolinary Klonowski from  High School with the name Simon Konarski in Vilnius become Olympians in XLIV Polish Language and Literature, which was held in April 2014 in Warsaw and in Konstancin. The Polish language Olympiad was attended by over 200 people from across the Polish and Lithuania, Ukraine, Belarus, the Czech Republic and Slovakia. Lithuania was represented by 10 people. Barbara Mikulewicz took 2nd place, Dominika Mieczkowska and Apolinary Klonowski – 3rd place.

During the ceremony at the Presidential Palace to the winners of the international Olympiad Polish Language and Literature accompanied Polish teacher: Elżbieta Zacharewicz, Lucyna Jaglińska and Teresa Król and Associate Professor Dr. Irena Masojć of Polish Language, Culture and Didactis on Lithuanian University of Educational Sciences (Lietuvos edukologijos universitetas, LEU).

Minister of Foreign Affairs: Respect for human rights – an integral part of the foreign policy of Lithuania

The ranking of local authorities of 2014. The Vilnius region goes down, the Salcininkai region goes up.