Mrągowo: traditionally, but with a jubilee in the background 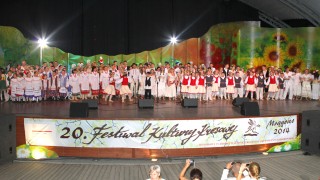 An unrivalled expert of the life and work of the great Poles-Borderlanders, a mistress of the Polish language, a propagator of Christian culture and patriotism, an actress, a writer of the Polish fate came to the anniversary edition of the festival, which twenty years ago began so modestly, and today it is difficult to imagine its absence. The festival is now permanently inscribed in the hearts and calendars of fellow countrymen in Lithuania, Ukraine, Belarus, and recently also in Russia and Kazakhstan.

An evening party with the participation of Barbara Wachowicz, called “Who is going to love you, Poland” started a three-day marathon of performances, presentations, meetings, enchantments and memories. Indeed, the great Poles from the Borderlands became the symbol of love for the homeland. Tadeusz Kościuszko, Adam Mickiewicz, JuliuszSłowacki, Eliza Orzeszkowa, JózefPiłsudski, KrystynaKrahelska. These are people that Barbara Wachowicz talks about. But how she does it!One would like to listen to her story for hours; her expression is moving, but, above all, there is her vast knowledge, collected during her hikes in the footsteps of great Poles. It was a remarkable performance.

A beautiful bunch of white roses brought from Vilnius was handed the writer by ApoloniaSkakowska, the director of the Centre of Polish Culture in Lithuania under the name of Stanislaw Moniuszko and the co-organiser of the Festival. Beautiful flowers were also handed by the director of the House of Culture and Sport in Mrągowo, Lech Gołębicki. AgataMłynarska, the first host of the festival from twenty years ago, and today the guest of honour, expressed her own word of thanks with kissing the hand of the mistress. It could not be unnoticeable what Agata said and how sensitively she was listening to the story told by Barbara. Both women share not only writing and acting, but also common, borderland spirit.

The organisers of the anniversary meeting, and these are: the Town Hall of Mrągowo led by the mayor OtoliaSiemieniec, the Society of Friends of the land of Vilnius, the Branch in Mrągowo led by Aniela Dobielska, the House of Culture and Sport in Mrągowo, led by director Lech Gołębicki, incorporated lots of new accents into the well-established formula of the festival. One of them was the exhibition in the Museum of Mrągowo called “Poles from Eastern Borderlands in Warmia and Mazury.” This is a partial transfer of exhibits, in the vast majority photographs and postcards, from the Museum of Warmia and Mazury to Olsztyn Castle. It was this museum that attempted to recall the fate of the inhabitants of Polish Borderlands four years ago, through exposing „repatriation” suitcases, furniture from mansions and souvenirs. Today’s inhabitants of these lands were willing to bring their dear things to show the young generation what they had to leave in those dramatic times, and what they could take into their new life without their beloved homeland.

Many participants of the festival came to the exhibition in the Museum of Mrągowo. There also came the leaders of the voivodeship – the Warmian-MasurianVoivodeship Marshal Jacek Protas and the president of the Warmian-Masurian Regional Council Julian Osiecki. The Marshal, being very proud, told the audience that he is familiar with the things exposed, thanks to his parents and grandparents who also come from the Borderlands.

Among those who came to the exhibition, there stood out the boys in Polish costumes from the past and the girls whose beauty was not typically Slavic. They came from Karaganda, Kazakhstan, travelling almost 6,000 kilometres. There was the Polish Marshal away on business a year ago and he got to know that there is a Polish band in Karaganda. These young people are the descendants of the Poles deported there during the uprisings – the January and the November – and also in Soviet times. The Marshal Jacek Protas invited the band to Poland for the festival, and for a longer rest in the beauty of Warmia and Mazury. The young people were preparing the whole year for the trip, they learnt how to dance Mazur, they learnt Polish poems and sewed costumes – Polish and Kazakh. Their beautiful performance was admired at the gala concert in the amphitheatre.

In the recent festival days Mrągowo offered the visitors a lot of smaller and larger issues about the festival – catalogues about all groups participating in it, an illustrated chronicle of two decades whose author is the undersigned, and the photographer is Jerzy Karpowicz.The annual exhibition of Jerzy Karpowicz’s (who is present at the festival each year) photographs was honoured with gratitude and the Old Polish “stolat” (the Happy Birthday song). The chronicle hardship was also honoured with Ukrainian “stolat”, intoned by DorotaJaworska, the editor of the quarterly magazine “Krynica” which comes out in Kiev and is supported by the Dominicans. The editor Jaworska came to the festival for the first time, but she immediately won the hearts with her directness. By the way, since recent times, she has been the President of the Federation of Polish Media in the East. She is a poet.

Poets, like every year, also had their poetic meeting. The poets from Lithuania presented their poems – they were ApoloniaSkakowska, AleksanderŚnieżkoandAleksanderSokołowski. Belarus was represented for the first time at this year’s poetic meeting at the festival in Mrągowo by a young writer, Herman Pańkow from Grodno. The poets read their poems during the meeting at the monument of St. John Paul II, and – traditionally – in the church of St. Wojciech, during the Mass for the intention of the Borderlanders scattered throughout the world.

The Counsellor to the Minister of Foreign Affairs of the Republic of Poland, Grzegorz Nowak, was present at many meetings and at the press conference. Mayor OtoliaSiemieniec reminded that the Ministry of Foreign Affairs was the main sponsor of this year’s festival, for which she thanked Mr. Counsellor. It was also the occasion to thank Mr. Counsellor for his support to publish a book named “Zawszewierni „Piątce” (Always faithful to the ‘Five’) and to give him the book. As it turned out,Grzegorz Nowak is familiar with the oldest Polish Vilnius school under the name of Joachim Lelewel for another reason.The students of this school who won an arts and literature contest have recently visited Poland, at the invitation of the Ministry of Foreign Affairs of the Republic of Poland.

The group leaders from Lithuania, Ukraine and Belarus were alarmed by the information given at the conference by the mayor OtoliaSiemieniec that this year’s festival will not be broadcast by the Polish Television. There is also a real threat that TVP will not support the festival in the following years, and it is the fact with the organisers and participants will not agree. That is why they wrote a request letter to the management of TVP to ask for appreciating the importance of the Borderlands festival and not to abandon the tradition of supporting it.

The gala with surprises
Imagination of the directors of gala concert in the amphitheatre in Mrągowo is admirable. Almost all of the habitués, and here are many of them, noticed that this year’s concert was extremely interesting. It began with a song about the Borderland Capital, written by a poet from Vilnius, AleksanderŚnieżko, and the music was composed by a local composer, MariuszGarnowski.It was a great success – a choir, consisting of more than 400 people, stood on the stage to begin a six-hour concert marathon with this song. “This song was bornat the Neris River/ And though we are separated by the Bug River/ There the ears of wheat lean in the same way/ The same crosses are by the roads”…

We are glad that at the 20th festival there arrived groups that participated in the first festival twenty years ago. These include e.g. “KapelaWileńska” and “Zgoda” from Vilnius. The first one, like in the past, consists of the same congenial Vilnius boys (only late Marian Wojtkiewicz did not live to see the day of the jubilee meeting). Meanwhile, “Zgoda”, which was in the past almost a child-band, grew up and became more manly. They are preparing their own jubilee of 25 years, which will be held on 25 October.

A nice surprise was made by the hosts of the first festival –wonderful AgataMłynarska, who was associated with the festival for 14 years, and WojciechMalajkat. This famous actor is particularly connected with Mrągowo –he was born here and he spent here his childhood. They both warmly and humorously talked about their first experiences on stage. They bowed down to the organisers and audience.

With great appreciation and gratitude it was also mentioned about the originator and organiser of the Borderland Festival, RyszardSoroka and about the first director of shows, CzesławKujawski, who have gone to a better world. Reflective words about memory and gratitude expressed by Aunt Franukowa, that is our Vilnius Anna Adamowicz, must have been moving.

Although the concert marathon lasted the entire six hours, most of the audience endured till the end. The audience sang themselves, danced, and it was with such verve that in the individual moments the lenses of reporters were directed only at them.

Lithuania was represented by a group called “StoUśmiechów” (A Hundred of Smiles), which is the pride of Polish artistic community of Vilnius, and the oldest school group “Wilenka”. With more than 40 years of tradition “Wilenka” sang for their fellow Poles so ambitious and difficult song, which is the polonaise “Farewell to homeland” by MichałKleofasOgiński.

The audience at the European Union Square stage was also entertained by “KapelaPodwileńska” from Nemenčinė.

“NiebieskieChabry” from Kazakhstan performed with three, how various, dances. A kind artist nicely recognized emotions of her band mates – “far away is for us to Poland, but Poland is in our hearts.” Before the audience there also performed a group “Chabry” from Belarus, wonderful “BiałeSkrzydła” from Molodechno or already well known here “GrodzieńskieSłowiki”, whose founders are Alicja& Andrzej Binert. The habitués of the Borderland Festival with pain learnt that Mr. Andrzej also looks at his babe – the band – from heaven.

“Wianeczek” from an Ukrainian villagePietrowiecDolny, “Niebo do wynajęcia” from the villageStrzałkowicenearSambor, “PodolskiKwiat”, “Bukowynoczki” and The Duo of Bandurists – these are the representatives of Ukraine. Mother Nature has given them so beautiful voices. The bands from Ukraine performed with the well-known folk repertoire and this is what was the most moving.

The group which showed up on the stage most often was “Sukces” – a band from Mrągowothat adopted the Borderland style and character. It is a great band!

During the gala concert there was also held the award ceremony. The badge of the Ministry of Culture and National Heritage of the Republic of Poland “Merit for Polish Culture” was given to OtoliaSiemieniec, the Mayor, and to the director of the House of Culture and Sport Lech Gołębicki. The badge “Honoured for Warmia and Mazury”was received by Aniela Dobielska, Anna Adamowicz, Dominik Kuziniewicz, Jerzy Karpowicz and the undersigned – it was given by the Marshal Jacek Protas and Julian Osiecki, the President of the Regional Council.

Let’s conclude this report with a very short poem by DorotaJaworska, called “LitanianaDzień 15 sierpnia” (The Litany for 15 August):