Synagogue at Geliu 6 Street in Vilnius needs to be rescued 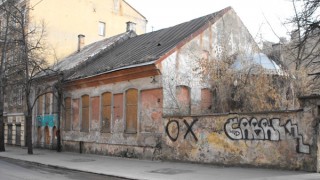 Before World War II, Vilnius was home to approximately 100 synagogues and houses of worship.
Currently, the only open synagogue is the choir synagogue at Pylimo 38 Street.
The synagogue of Zavel Germaize and David Levinson at Geliu 6 Street, despite having survived, is in a dreadful condition. The Department of Lithuanian Cultural Heritage has dedicated certain amount of money in order to prevent the buiding from collapsing.

The synagogue of Zavel Germaize and David Levinson at the former Kwiatowa Street, nearby the train station, was built in the 19th century. In 1925, it consituted a place of debut for the money exchange office owned by Moshe Kusevitski (1899-1967), who after the war proved successful in the USA. During the Soviet rule, the building was nationalised, holding flats and utility rooms. Although the Jewish society regained their temple in the 90s, the building’s condition was still leaving a lot to be desired.

At present, the project aimed at restorating the synagogue is being prepared. However, before its very realisation, the Department of Lithuanian Cultural Heritage has given 50 thosand LT for some conservatory works such as securing the construction of roof and walls as well as the roof’s temporary coverage. In addition to this, the endeavour has also been supported by the Religious Community of Vilnius Jews who devoted 5 thousand LT for this particular purpose.

According to the director of the Department of Lithuanian Cultural Heritage Diana Varnaite, people who are unaware of the fact that there was once a synagogue at Gelju Street, are likely to not notice the forementioned building at all. ”In order to restore the initial state of the building, a lot of hard work needs to be done. Yet, before it happens, we are doing our best, i.e. we secure the building from collapsing and simoultaneously work upon the restoration project”- said Diana Varnaite.

Cytacka has led to the biggest rift in the coalition