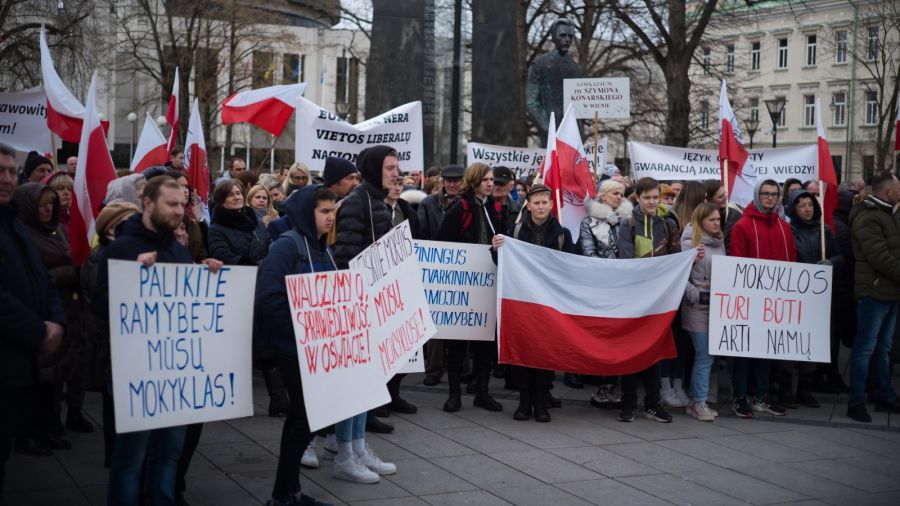 On March 31, during the online council meeting of the local government of the Trakai District, the decision was made about reorganization of two schools. After two-hour discussion 15 councilmen voted for the reorganization of aforementioned Polish schools, 7 were against, and 2 abstained from voting.

Breach of Framework Convention for the Protection of National Minorities

During the conversation with TVP Wilno Darius Kaziniec, lawyer of European Foundation of Human Rights, said that in this way The European Framework Convention for the protection of national minorities might have been breached.

“The Foundation addressed the letter to relevant institutions, including Lithuanian Ministry of Justice, Polish Ministry of Education and Science, as well as The Ministry of Education, Science and Sports of the Republic of Lithuania, Polish and Lithuanian government and local government of the Trakai District too. Unfortunately we have not received a response from the Lithuanian side, but we did mention possible breaches of Framework Convention for the protection of national minorities. Local government of the Trakai District had quite a lot of meetings with the community and the school, however it did not bring any results. The local government did not take into account neither the letter with our observations, nor the objection of schools which stood out against this reorganization with valid points,” claims Darius Kaziniec.

Legal Action as a Rescue

According to the “Macierz Szkolna” association, the only rescue left is to take on the legal action.

“What can I say. Residents of the Vilnius Region, including Paluknys and Senienji Trakai residents, are getting hurt. The local government of the Trakai District does everything it can to narrow down the Polish education in the Trakai District. Not many Polish schools are left there anyway” comments Józef Kwiatkowski, chairman of the “Macierz Szkolna” in Lithuania, for TVP Wilno.

“And so it is hard to be surprised by the decision, because the local government of the Trakai District has been pursuing a policy of shutting down Polish schools in the region for many years now. Indeed, we have already stood up in defense of Polish education more than once—and the Polish community did as well. A few years ago, when there were plans to shut down Polish schools and transform some of them in high schools, or degrade their status to the level of elementary or even primary schools, the Polish community did not give up, but kept fighting. The defense of Polish schools in Trakai, I believe, will not end with this. I think that the only way is to apply to the court” underlines Józef Kwiatkowski.

The authorities of the Trakai District propose the reorganization in accordance with the idea that Longin Komołowski Middle School in Paluknys is to become a branch of Henryk Sienkiewicz Middle School in Lentvaris, whereas Andrzej Stelmachowski Elementary School in Senienji Trakai is to become a branch of Middle School in Trakai. It poses a threat of degradation of ten-year school to eight-year school. But everyone agrees in emphasizing the fact that they lived through few of such reorganizations. It has always ended in the same way – shutdown of Polish schools.

Andrius Šatevičius, mayor of the Trakai District, stated that the decision of the local government council is the right step towards a well-organized network of schools and the improvement of quality of education. And when we ask about the guarantee for schools and whether they can survive as Polish institutions, he finally admitted that there is no such guarantee and he shifted the responsibility for maintenance of aforementioned branches to the schools alone.

“Probably the guarantee should not be provided by the local government, but by the middle school or the school to which these institutions will be included as branches. They will become the main legal entity with a legal personality and the control over future actions. I would also like to point out that we combine with middle schools of national minorities, so if the directors of such schools will keep it as a unit, it will remain as one. Therefore the question about keeping the guarantee must be directed rather to the directors” says Andrius Šatevičius.

At the next meeting of the local government of the Trakai District on April 28, councilmen will be discussing the process of the reorganization of Polish institutions.

Translated by Sonia Dados within the framework of a traineeship programme of the European Foundation of Human Rights, www.efhr.eu.

Parents, students, and teachers of two Polish schools in the Trakai region seek US diplomats’ support.…