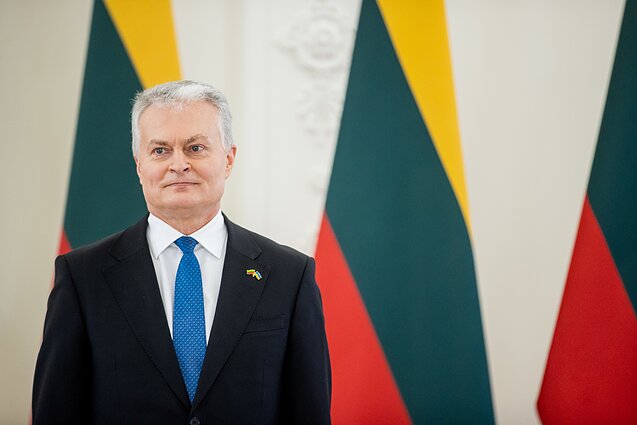 The meeting of G. Nauseda and Frank Walter Steinmeier in the Presidency / Picture of J. Stacevicius/ LRT

On Thursday, the Lithuanian President Gitanas Nauseda met with Frank Walter Steinmeier, President of Germany, who has recently arrived in Lithuania. The leaders of Lithuania and Germany discussed the response to Russia’s war against Ukraine and help measures used to repel the attack, the Presidency said in a press release.

The leader of the state stressed that a very important signal is sent to Kremlin by the unprecedented unity of the West and the way it directs attention to the raging evil.

“Punitive sanctions and complete isolation of Russia is only the beginning of what the West will do as a response to the aggression Russia displays against Ukraine. Yesterday, the United Nations condemned the military aggression of Kremlin. Even though symbolic, this is a sign of complete unity of the world,” said G. Nauseda.

The head of state additionally stressed the necessity to continue to send help to Ukraine ­ political, military, economic. According to G. Nauseda, it is our duty to provide the Ukrainian citizens with the all the needed tools to defend their country from the Russian army. The President thanked Frank Walter Steinmeier for Germany’s historic decision to support the Ukrainian war with military weapons.

Nauseda says that the next step that the countries of the European Union must take is to support Ukraine’s application for the accession to the EU, to grant it the status of an EU candidate country as soon as possible and start the negotiation process.

“Ukrainians have proved to be worthy to be members of the EU both with their heroic fight for the values that all of us share and with their progress of carrying out reforms in their country,” said the President of Lithuania.

Translated by Monika Ivanavičiūtė within the framework of a traineeship programme of the European Foundation of Human Rights, www.efhr.eu.

“Solidarity with Ukraine” Concert in Vilnius

Lithuania and The World Support Ukraine

Lithuania, like other European Union countries, is taking Ukrainian war refugees. Among them are also children,…