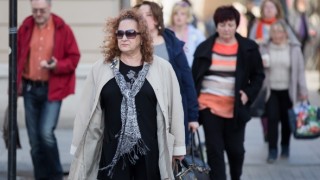 Over the past ten years, the country’s population has decreased by approximately 233,000. According to the preliminary data of this year’s census published by the Department of Statistics on Tuesday, December 21, there were 2.81 million inhabitants in Lithuania as of January 1, 2021. Poles are still the largest national minority – 6.5 percent of the total population.

The preliminary census data show that Lithuanian society remains homogeneous. Concerning nationality, the largest group of inhabitants are Lithuanians – 84.6 percent of all inhabitants.

Preliminary census data on nationality is provided to the nearest tenth of a percent.

According to the census data, 74.19 percent of the Lithuanian population is Roman Catholic (in 2011 – 77 percent). The second-largest religious group are the Orthodox – 3.75 percent.

Migration and the negative natural growth rate contributed to the decline in the number of inhabitants of the country.

Due to migration, the number of inhabitants in Lithuania decreased by 118.9 thousand, and due to the negative birth rate (more inhabitants died than were born) – by 113.7 thousand.

Taking a closer look at the large cities of this country, the number of inhabitants increased only in Vilnius – by 4 percent. Currently, 556.1 thousand people live in the capital of Lithuania. It is one-fifth of the total population of the country. The number of citizens in other large cities has decreased.

Conforming to the data published by the Department of Statistics, the most decreased number of inhabitants was in Panevezys – by 11 percent, Siauliai – by 8 percent and Klaipeda – by 6 percent. The population of Kaunas inhabitants decreased proportionally – on January 1, 2021, society here numbered 298.8 thousand people. In 2021, 68.2% of the total Lithuanian population resides in cities (66.7% lived in 2011). This year, the census was conducted for the first time on January 1 (based on data from 13 state registers, 5 information systems and 24 night shelters).

Contrary to the previous census, the enumerators did not visit the inhabitants.

Translated by Magdalena Kurdziel within the framework of a traineeship programme of the European Foundation of Human Rights, www.efhr.eu.