In the president’s office on the media of national minorities 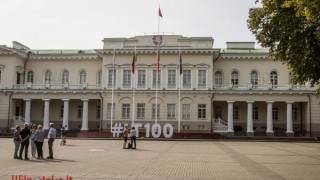 Media of national minorities, including Polish in Lithuania, were the subject of a meeting at the president’s office, which took place on Friday, January 31. Polish affairs were represented by Robert Mickiewicz, president of the Polish Media Association in Lithuania, executive editor of “Kurier Wileński”.

“We met with advisers of President Gitanas Nausėda from the political and communication group. We presented the situation of the national minority media in the country, their specificity and needs, “Robert Mickiewicz informed Wilnotka.

One of the main problems is the issue of financing.

“Media of national minorities practically do not receive state financial support. It is very difficult to get public money. So we were thinking how to change the situation, “says Mickiewicz.

The currently operating State Fund for Supporting Press, Radio and Television is to be replaced by the Media Support Fund operating at the Ministry of Culture. “This is a good time to change the formula for financing the media,” says the executive editor of Kurier Wileński.

“We count on the support of this initiative by the president, government, MPs and the special commitment of MPs from the Electoral Action of Poles in Lithuania – the Association of Christian Families,” said Mickiewicz.

“This is a fundamental turn when it comes to the activities of the president’s office against national minorities,” says Mickiewicz. He reminds that Nausėda’s predecessor, Dialia Grybauskaitė, “was not interested in the issues of national minorities”.

Andrzej Pukszto, head of the political science department of the Witold Wielki University in Kaunas, also notes that “this is a novelty in terms of relations between the office of the president and national minorities.”

Andrzej Pukszto and Robert Mickiewicz very positively assess the activities of the new team in the office of president and express the hope that this will result in concrete initiatives.

Last week, President Nausėda declared, among others: “I am faithful to my oath and, if necessary, I will protect our citizens against discrimination on any grounds within the limits of the powers granted to me by the Constitution. I also swore that I would serve the good of all Lithuanian people. ”

National minorities in Lithuania account for around 17 percent. inhabitants of the country. Poles are the most numerous group – nearly 6 percent

Based on: inf. incl.

Pabradė schools merger is off the table

Nationality in the Hands of Politics: Lithuanian-Polish About Names Adapted to Lithuanian Language, Relationship With Poland…

The questions of national minorities in Lithuania are pushed aside or, after conflicting the society, remain…

The Difficulties That the Students, Belonging to National Minorities, Face, Have Opened up Another Difference of…

Students, whose mother tongue is not Lithuanian, barely speak it, sometimes don’t at all, except for…