Are the issues relevant to national minorities forgotten in Lithuania? 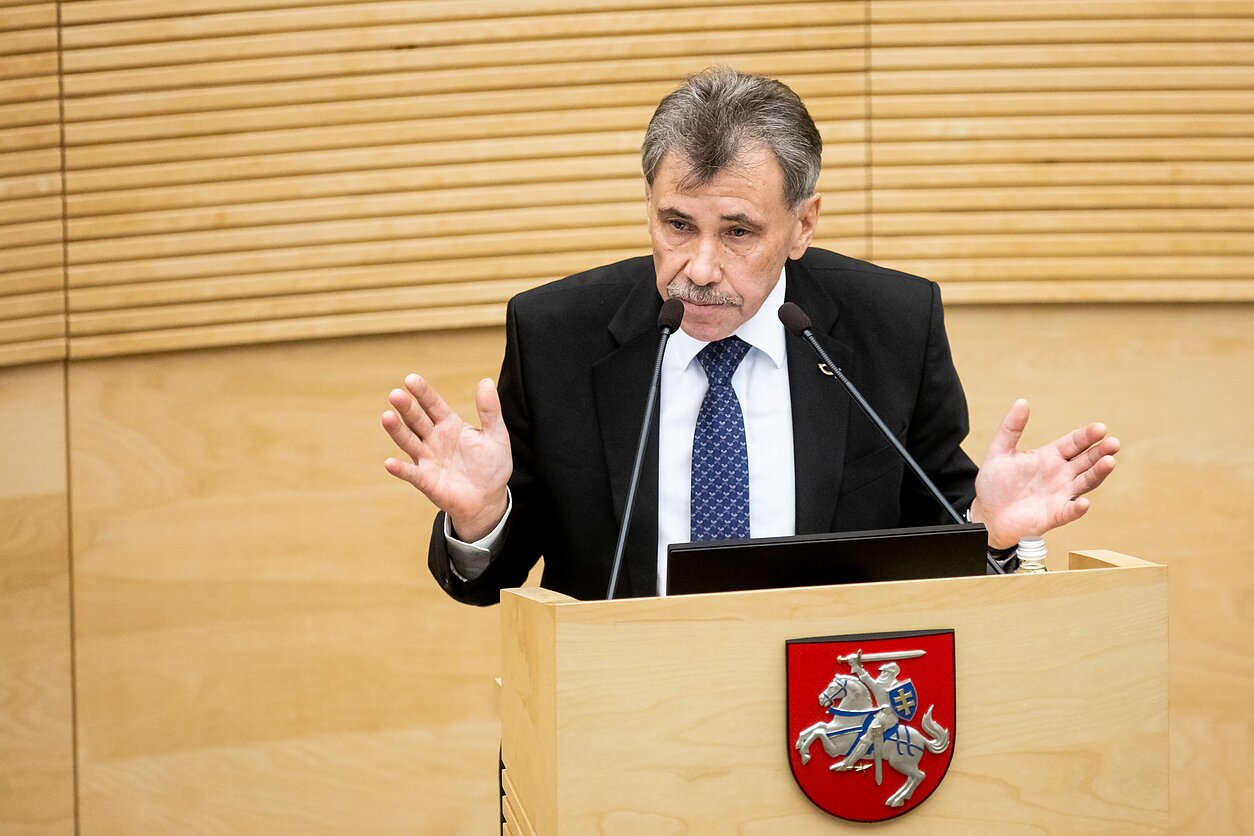 After the Electoral Action of Poles in Lithuania – Christian Families Alliance (EAPL-CFA) became a part of the ruling coalition, the proposals on taxing bank profits, medication reimbursement to seniors, raising child money and on other social issues were offered on their initiative.

However, the opposition points out and wonders why, with the Polish electoral campaign and its real influence, the most pressing issues for national minorities are not raised, such as the writing of personal names in documents in the original language. The question of the languages used in street nameplates in the abundantly populated areas of the national communities is also not legally resolved.

Kasčiūnas: EAPL-CFA mobilizes voters on these issues, but does not give real priority

Conservative Laurynas Kasčiūnas pointed out that parliamentarian Ingrida Šimonytė, who participated in the presidential election, already at that time was in favor of resolving the issue of personal names in original documents, while Gitanas Nausėda, the winner of the election, proclaimed himself in favor of the spelling of exact personal names on the second page of the documents, received most of the support of the inhabitants of the regions, especially in the areas populated by the Poles of Lithuania, says L. Kasčiūnas.

This, according to the parliamentarian, demonstrates that the EAPL-CFA, who are mobilizing this electorate and present in the ruling majority, do not really prioritize these issues.

“Most of the support G. Nausėda received was given by Šalčininkai district. It only shows that all of these issues are purposefully politically undermined by this party, it is just the flag needed to mobilize its community, to make up the enemy and not to actually address the issue.” said L. Kasčiūnas to ELTA.

According to the politician, EAPL-CFA is not worried about the fact that these issues important to national minorities are not completely resolved. Because of that, claims L. Kasčiūnas, the Polish electoral campaign can manipulate the voters who still remain a loyal electorate.

“I am sure it is just political masquerade to them. For them, it is not a problem – it is just purposefully undermined things.”, spoke the TS-LKD member.

He also emphasized that these unresolved issues may also be due to the fact that not all rulers agree on the issues important to the Polish national minority.

“It may also be due to the fact that there is no agreement because some of the “farmers” are skeptical about these issues, but I think that these are not the real interests. I remember the voting on mine and Ažubalis’ proposal and, let us call it, the more liberal version. The number of votes was more or less the same, as both of us have passed the presentation stage”, claimed L. Kasčiūnas.

The conservative also noted that the Poles of Lithuania do not have another alternative political party formed on the basis of this national minority.

“The problem is that there is no political alternative to the community that could break this EAPL domination”, explained L. Kasčiūnas.

Jedinskis claims that these issues are not forgotten: we have been accused of representing one community

Nevertheless, Zbignevas Jedinskis, a member of the EAPL-CFA, claims that the issues of writing personal names in the official documents in the original language and the language used in street nameplates are not forgotten. The fact that the EAPL is currently raising other issues, according to the parliamentarian, is not contradictory.

“These issues do not contradict each other. Right now, our social, priority programme suggestions – on child money, on family card and everything else in our programme – are included. The issues of national minorities have not disappeared, they have always been and are relevant, although some of them are being solved on their own, regarding the street nameplates. (…) the issue is partially solved – the court sessions are over and the street names can be written, it is not punishable now”, spoke Z. Jedinskis and added that the EAPL-CFA is also in favor of writing personal names in the original language, thus, according to the member of the Seimas, sooner or later, these issues will be raised again and correction will be proposed to the project now present in Seimas.

“Regarding the time, I think these issues will certainly be raised, sooner or later. Especially since we are not really satisfied with the project regarding the spelling of surnames so far – there are only three letters. These letters are very important not only to the representative of national minorities, but also to Lithuanians who have married abroad and have some problems. These are the problems known to everyone”, emphasized Z. Jedinskis.

The representative of the Electoral Action of Poles also reminded that the EAPL-CFA, as a political party, had previously been mocked in the public for representing one community. Because of that, says Z. Jedinskis, the Electoral Action of Poles, while still a part of the government, raises other social issues important to a large portion of society.

When asked if he believed that the EAPL-CFA would be able to pass a draft law on name writing before the end of this parliamentary term, Z. Jedinskis replied in the affirmative.

“I truly think so. You understand perfectly that right now we are on the budget and there is simply no time to realize it right this month or this week. I think that once the budget is adopted, there will be, if I am not mistaken, two sessions before the election, so I truly think these issues will be resolved. Especially when it is not a problem of just national minorities”, he added.

However, the representative of the opposition L. Kasčiūnas did not believe this. The lack of unanimity on this issue among the ruling power is raising difficulties, he claims.

“It is too easy to talk about succeeding (during this parliamentary term – ELTA)”, stated the conservative.

The original spelling of personal names has been under discussion for many years in Lithuania. There are suggestions to allow the use of Latin character on the main page of personal documents, as well as to write the first and last names in Latin characters only on the second page of the document.

Translated by Julija Vaitiekūnaitė within the framework of a traineeship programme of the European Foundation of Human Rights, www.efhr.eu.

Could ‘Anna’ appear in a Lithuanian passport? The Ministry of Justice will refer to the Constitutional Court

Błaszkiewicz: It is necessary to optimize the school network