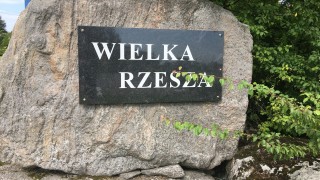 At the entrance to Didžioji Riešė, a village located in Vilnius region, a marble plate has been placed last week with the name of it written in Polish. Daily paper “Lietuvos rytas” carried whole ‘investigation’ in order to find out why the name is written in Polish, which according to Lietuvos rytas ‘dims the little one written in Lithuanian’. It has been an initiative of the citizens of the village.

Head of the parish, Waldemar Rynkiewicz, has assured journalists from the Lietuvos rytas that he does not know anything about circumstances of planning a polish name on the plate – WIELKA RZESZA. Stone where the plate has been placed has been there for ages and the area is not private, but public.

Vilnius District Municipality informed that inhabitants of polish district (Mokyklos, Riešės, Žvėrališkių i Rūtų streets) have been the initiators of it. They payed for the plate with their own money. Daily paper Lietuvos rytas quoted by clerk, Jolanta Gulbinowicz: ‘According to residents, it has leaven and embellished the stone’. She added that survey has been done among the people living in the area – what do they think about the plate. Majority answered that they like the idea and they do not want it to be removed.

Wielka Rzesza is the biggest village in the Riešės parish, with 2.5 thousand inhabitants, Traditionally the majority of inhabitants are Poles. Recently there are more and more of lithuanian families too. In the awareness of inhabitants polish name of the village is the one still and mainly functioning – Wielka Rzesza, but not lithuanian Didžioji Riešė.

Asked for a comment concerning the polish naming, representative of the government in Vilnius District, Vilda Vaičiūnienė, answered that it does not belong to her competences.

The representative has already had problems with non-Lithuanian plates with streets naming in Vilnius. Vilnius already has 10 decorative plates. The first one on Islandijos street has been placed in Icelandic language. It was a nod to Iceland, the first country to approve independence of Lithuania. Next plates were in English – by Vašingtono square, Russian – by Rusų street, Polish – by Varšuvos street, Tatar – by Totorių street, Yiddish and Hebrew – by Žydų street, German – by Vokiečių street, Karaim by Karaimų street, Latvian by Latvių street, Dutch – by Olandų street. Vilda Vaičiūnienė tried to charge these actions in the court, demanding removal of non-Lithuanian naming, but she lost and the court rejected the motion as baseless.