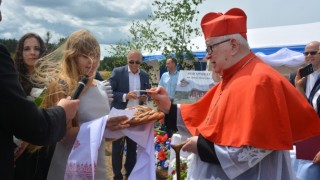 The Cardinal Henryk Gulbinowicz Kresy Meeting House will be set up in Straszowice in the Polish Lower Silesia province. It will be the first place in Poland, where the people of Polish origin, especially the elderly, living in the territories of former USSR republics and dreaming about a return to the motherland will be invited. On the 1st of July, there was a ceremony of consecrating the cornerstone of the future centre led by Cardinal Henryk Gulbinowicz, who was born and grew up in the Vilnius Region.

According to the will of the Cardinal, the Kresy Meeting House will be the home for all, who very often had no possibility to return to Poland and live within its borders. The complex will consist of the manor house in the central part. It is planned that it will be similar to Cardinal’s family home in Šukiškės near Buivydžia in the Vilnius Region. There will also be small houses where the Poles returning from the territories of former USSR republics will be live.

The initiative of building the house for the people from Kresy appeared several years ago. Its originator and one of the main initiators of its realisation is Cardinal Henryk Gulbinowicz.

In the former territories of Poland, as well as in Siberia or Kazakhstan, there are still many Poles who dream of returning to their homeland. Many of them are old and they would like to spend at least the last years of their life in Poland, where their compatriots would provide them with care and treat them with kindness. The Foundation Studio Wschód wants to fulfil these dreams. It is the initiator of many actions in the territory of Kresy, the former Polish Eastern Borderlands, such as “Donations to Kresy” or “Save the grave of your great-grandfather from oblivion”. Cardinal Henryk Gulbinowicz is its co-founder and patron. The foundation is also one of the main co-initiators of building the Kresy Meeting House. Now the initiators of building the house has the mission of raising funds for the realisation of the project.

The cornerstone of Cardinal. Henryk Gulbinowicz Kresy Meeting House was consecrated during the Holy Mass that was concelebrated in St Lawrence Church in Wołowo by the Bishop of Kalisz Edward Janiak and the parish priest of St Lawrence Church father Stanisław Małys. The cornerstone of the Kresy Meeting House was consecrated by Cardinal Henryk Gulbinowicz.

Afterwards those who took part in the ceremony went to Straszowice (located 6 km from Wołowo), where the Kresy Meeting House will be built soon. The symbolic oak was planted there and the notarial deeds necessary for building the manor house were signed.

We would like to remind that the future patron of the Kresy Meeting House 93-year-old Cardinal Henryk Gulbinowicz, the former Archbishop of the Archdiocese of Wrocław, is the Honorary Citizen of the Vilnius Region. This honorific title was bestowed upon him already in 2015 by the Council of the Vilnius District Municipality for cultivating Christian values ​​and traditions. The ceremony of awarding him a commemorative medal, the material sign of being the Honorary Citizen, took place on the 9th of June 2017 on the Market Square in Wrocław during the Kresy Concert in the framework of action “Save the grave of your great-grandfather from oblivion”. Cardinal Henryk Gulbinowicz is the honorary patron of this action. It was the Mayor of the Vilnius Region Maria Rekść, who awarded the medal to the former Archbishop of Wrocław. She also invited him to Vilnius.

The last time Cardinal Henry Gulbinowicz visited Vilnius was almost three years ago when he was celebrating the 90th anniversary of his birthday.

Celebrations in Bogušiai: The military operation “Ostra brama” was finished there

Textbooks for students of Polish schools have arrived in Lithuania. – We talked about this problem…
Kurier Wileński September 2, 2019

On the 2nd of September, teaching began in most schools across the country. ‘Macierz Szkolna’ approaches…
Znad Wilii May 22, 2019