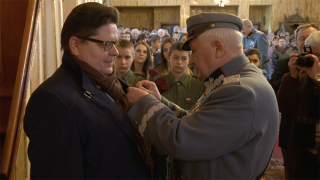 On the 82nd anniversary of the death of Marshal Józef Pilsudski, the Poles from Vilnius, the representatives of the Embassy of Poland in Lithuania and guests paid tribute to the founder of Poland’s independence. A wreath-laying ceremony was held at the Mausoleum of the Mother and the Heart of Son in the Rasos Cemetery. In the ceremony the representatives of Związek Piłsudczyków RP, the Polish organization being the association of people following Józef Piłsudski’s ideals, took part. On the 12th of May in church in Butrimonys father Józef Aszkiełowicz and the chairman of the Polish Army Veterans Association in Lithuania Edward Klonowski were awarded the Golden Cross of Józef Piłsudski, the editor of the online portal Wilnoteka Walenty Wojniłło was awarded the Silver Cross. Krzysztof Subocz, a famous radio presenter and the correspondent of a newspaper Kurier Wileński, was nominated for the rank of major of Związek Piłsudczyków RP.

“Through the presentation of the Golden and Silver Crosses, we try to give thanks to those who promote the idea of ​​Marshal Józef Piłsudski, who attempt to show that there is no right for the future in a homeland where there is no memory of its past,” said the chairman of the board of Związek Piłsudczyków RP General of the Association Stanisław Władysław Śliwa.

The prayer in the Saint Michael the Archangel Catholic Church in Butrimonys was led by father Marian Próchniak, prelate, PhD., holding the rank of commander. As the father pointed out, Józef Piłsudski was next to John Paul II a great Pole of the 20th century, who with arms in hands “hewed the independence and sovereignty of the homeland. Poland has returned on the map of Europe and the world as free among the free, equal among the equal.”

“We, the Piłsudski’s followers, draw the best of Marshal Piłsudski’s work. Marshal Piłsudski is a common good shared by the two states: Poland and Lithuania. All possible was done during the time of enslavement and communism, so that the people forget about Marshal Piłsudski. The communists tried to erase him from memory because the Bolshevik Russia lost only one war – the war in 1920,”said Stanisław Władysław Śliwa.

Związek Piłsudczyków RP was founded on the 13th of September 1988 on the initiative of the activists for independence, intellectuals and actors, academics, the people of culture and art, veterans and soldiers.

The organization brings together thousands of members organised in districts and units, among others in the cities being the capitals of the region and in county towns. Związek Piłsudczyków RP has got its own flag and a badge with the image of Marshal Józef Piłsudski. The solemn blessing of the flag took place on the 25th of April 1993 in the Field Cathedral of the Polish Army. Among those who took part in the ceremony was the daughter of Marshal Piłsudski Ms Jadwiga Piłsudska-Jaraczewska. The statutory aims of the Association are: promoting Józef Piłsudski’s actions and thoughts related to the state-building, shaping citizenship on the basis of the ideas he preached, the patriotic education of the youth, the care of the places of national memory, collecting remembrances of Marshal and actions leading to independence of Poland. One of the main tasks of Związek Piłsudczyków RP is the cooperation with schools and the youth, as well as with organizations and associations preserving the traditions of independence.

The inauguration of the Wladyslaw Syrokomla Gymnasium in Vilnius

Meeting of Polish and Lithuanian experts on cultural heritage in Vilnius

Textbooks for students of Polish schools have arrived in Lithuania. – We talked about this problem…
Kurier Wileński September 2, 2019

On the 2nd of September, teaching began in most schools across the country. ‘Macierz Szkolna’ approaches…
Znad Wilii May 22, 2019