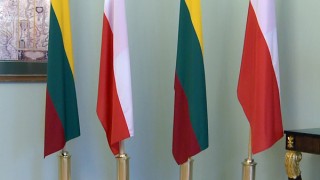 On the 20th December the Parliament of Lithuania accepted resolution concerning the strengthening of parliamentary diplomacy- they plead in this document for the rebuilding of relationship with Poland. Initiated by members of the Parliament’s committees of foreign affairs and European affairs document was supported in the voting by 76 MPs, nobody was against, 3 MPs abstained from voting.

In the accepted document the Parliament “pleads for the rebuilding of long-term interparliamentary cooperation with Poland which is especially important not only in terms of coordinating positions in safety issues in the region, but also in the context of abolishing given obstacles on a way to improving bilateral relationships based on reciprocal respect and understanding”.

Initiated by members of parliamentary committees of foreign affairs and European affairs document was supported in the voting by 76 MPs, nobody was against, 3 MPs abstained from voting.

In the resolution there are also proposed the strengthening of cooperation of Baltic states, declaration of support for Ukraine, Georgia and Moldova, a special attention towards Germany is pushed for- the aim is to provide the fluent deployment process of NATO battalion in Lithuania under the presidency of this country and for “maintaining the current policy of deterrence towards Russia”, and also the need for strengthening direct working relationship with Congress of the United States are declared.

The cooperation of Lithuania with Poland in recent years is being eclipsed by misunderstandings that depend different assessment of situation of national minorities, new authorities however declare striving to achieve the correct relation with Poland again.

On the base of bns.lt

Integration of national communities: awareness of where I am and what I can do

Kwiatkowski: the conditions of accreditation were to destroy Polish education

Lithuanian Parliament is urgently proceeding with a project on facilitating the change of the nationality entry…
Kresy.pl February 18, 2022