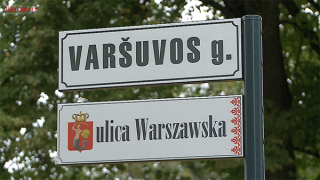 A plate with the Polish name of the Warszawska Street has returned to its proper place – as the mayor of Vilnius Remigijus Šimašius had promised, the plate, stolen some time ago, has been replaced with a new one. However, it is possible that local authorities will have to remove all of recently added non-Lithuanian plates – the representative of the government in Vilnius district claims that they do not fit in with the law on the state language.

The Vilnius mayor Remigijus Šimašius did not exclude the possibility that the disappearance of the plate was connected with forces objecting to good Polish-Lithuanian relations, but it was also considered that the plate had been stolen by some kind of ‘souvenir hunter’. In an interwiev with Wilnoteka the mayor admitted that the plate was very nice and decorative indeed, and he expressed hope that soon replicas of this plate would appear in Vilnius souvenir stores.

City authorities reported the theft to the police. Before the police finds perpetrators, the capital government commissioned a new plate with the Polish name.

However, it is possible that the plate will be removed – as demanded by the representative of the government in Vilnius district Vilda Vaičiūnienė. As she states, the local government has broken the law on the state language, according to which all official records of proper names must be in Lithuanian. Names of streets should be consistent with the record in the Public Address Register, which means they should only be in Lithuanian.

Based on: private information

LLRA MPs entered another Committees of the House.