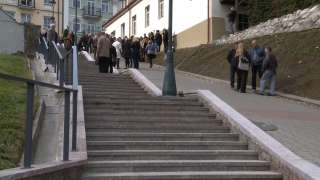 “Nigdy od ciebie, miasto, nie mogłem odjechać. Długa była mila, ale cofało mnie jak figurę w szachach” – „Nigdy od Ciebie, miasto”(„ Never from you, o city”) –it is one line of Czesław Miłosz poems cut on the stairs in the Old Town of Vilnius. The stairs leading from Bakszta st. to Safianiki st., which have been holding Czesław Miłosz name since 2011, were redecorated, and on the steps a sculptor Jonas Gencevičius has cut fragments of Miłosz’s poems –in Polish and with translation into Lithuanian. They can be read both climbing the stairs and going down.

„Nowhere in the word a great Nobel Prize laureate Czesław Miłosz  was commemorated this way. It is fortuitous that, that it happened in Miłosz’s youth city which, as he has written he could not leave.These stairs are like an open book of Miłosz’s literary production.”-said the director of the Institute of Lithuanian Literature and Folklore Docent dr Mindaugas Kvietkauskas,   within the celebration of unveiling the stairs, who was one of an initiator of commemorating coming from Lithuania Polish poet.

“It is not a monument it is something pompous. Nothing but  Czesław Miłosz’s poetry appeals to people, today’s Vilnius citizens and guests. What more is important- these are stairs which connect people, a common meetings spot. I think, that Miłosz would be glad, that he was commemorated just this way” –stressed Mindaugas Kvietkauskas in a talk with Wilnoteka.

The place was not chosen by chance: once Miłosz wrote that it is a first place in Vilnius, which he remembers from his childhood. Then he was wandering here as a student of Stefan Batory University.

„Czesław Miłosz always was full of concern of Polish-Lithuanian relations. He left us this concern in a testament. Today’s ceremony it is a great gift for a poet, because it will be a place where people will meet to commune with his poems. I rejoice with you. I dream of Vilnius, Krasnogruda and Szetejnie are a symbolic thread of a good vicinity on our border area. All of us are inheritors of traditions of the Grand Duchy of Lithuania. Let Polish poet who derives from Lithuania become one of patrons of this symbolic good vicinity”- said Małgorzata Czyżewska from the  Borderland Foundation who in Krasnogruda , in a family  Noble Prize winners grandfather ‘s manor house run the Czesław Miłosz European Centre for Dialog.

The stairs leading from Bakszta st. to Safianiki were named after Czesław Miłosz in 2011 on the occasion of the one-hundredth anniversary of his birth. But they were neglected. A group of Lithuanian intellectuals, among others mentioned Docent dr Mindaugas Kvietkauskas, a literature-specialist   Viktorija Daujotytė PhD, an essayist  and screenwriter Pranas Morkus,a  theatre-specialist   Irena Veisaitė Phd, a poet, Czesław Miłosz’s friend  Tomas Venclova PhD, a journalists  Ramunė Sakalauskaitė and Ramūnas Terleckas suggested to commemorate a Nobel Prize winner in an untraditional way: to put lines from Czesław Miłosz’s poems in Polish and and with translation into Lithuanian on the stairs.  The author and an executor of this project was a sculptor Jonas Gencevičius. The initiative was supported by the Ministry of Culture and National Heritage. The redecoration of the stairs was founded by the Capital  City Council.