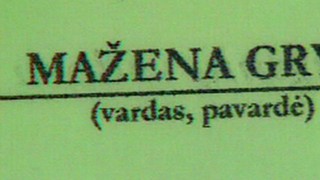 The Sejm left a project of an act of law dealing with the way of writing non-Lithuanian names politicians, who have a seat on the government front benches after October’s election. The Chairwoman of the Sejm Loreta Graužinienė thinks, that there are no chances to validate writing of non-Lithuanian names before October 9th.

“Before October, 9th I really cannot see the possibility of introducing this case to the agenda, because only two plenary sessions left. I doubt, if we manage to decide on this issue in this tenure, since as far as  I am aware  – deputies have not changed their minds. The Sejm is practically divided into two halves and it is difficult to make a decision” –said the Chairwoman of the Lithuanian Sejm Loreta Graužinienė.

Graužinienė stressed that, the Sejm’s Committee of Education, Science and Culture have not considered the project applied by a civic group named “Talka: Už Lietuvos valstybinę kalbą” (Self-help: For national Lithuanian language”) yet. The group suggests to write down a name and a surname exclusively in national language according to its sound. It is allowed to write in non-Lithuanian language in further pages in a passport or in the back side of the ID card. The project’s authors also want to introduce in the act of law that the Lithuanian alphabet consists of 32 letters (nowadays, does not exist such record in any act of law).

According to a Chairwoman of Sejm, till the civic project is discussed, deputies cannot make a final decision concerning the way of writing non-Lithuanian names. “I would like to remind , that we have to respect and foster our language, because our language undeservedly is eclipsed, and in the first place are put private issues, and on their grounds someone wants to decide on particular people problems. We have to perceive it comprehensively, to bring up an issue of national importance. The language is something particularly important for our country, for the future of our country, and the most – right now” – she added.

According to a Chairwoman of Sejm, courts handle with single cases. “ In courts every case is considered separately, every situation is considered individually, the court’s practice is shaped. Nevertheless, nowadays we have such acts of law and everyone, in our country, is obliged to preserve them” – said Loreta Graužinienė.

Another bilingual street plaque was unveiled in Vilnius