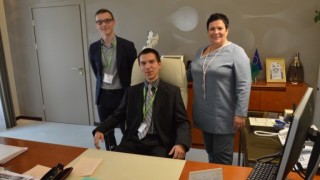 On Monday, the 22nd of August, the eighth edition of the project “Students – to the government” has started. About 30 high school graduates and junior high school graduates from Lithuania started internships in the Lithuanian government. During the project, which will last for a week, the students will have an opportunity to get to know how the governmental institutions work and how the everyday work of the government officials looks. Meetings with the ministers and the executives of various Lithuanian governmental institutions are planned within the project. In the students shadow cabinet there is i.a. Daniel Rogoża – this year’s graduate of the Junior High School in Eišiškės.

Daniel Rogoża along with Gabrielius Zaveckas, a graduate of the Junior High School in Vilkaviškis, in the students government are representing the Ministry of Science and Education. “Both of the boys are great and active, I believe that they will perform the tasks well. The education system is very important to them. We have discussed the strong and the weak, in their opinion, sides of the system. I’m glad that they are perceptive and that they noticed the areas that, also in the opinion of the ministry, require attention and decisions such as preparing the schools staff, improving the system of qualification and the prestige of a job of a teacher”-said the Minister of Education and Science Audronė Pitrėnienė after the meeting with the participants of the project.

This year, Daniel Rogoża has passed the final high school exams with flying colors. He got “hundreds” for the language exams: Lithuanian, English and Russian, 97-for biology and chemistry, 95-mathematics and 10 for the scholastic Polish language exam. In the autumn, he will start studying at the University of Vilnius. “In such a small country as Lithuania, which has no deposits of oil or any other natural resources, the young people should be seen as the greatest wealth and potential, in which one should invest. I am a maximalist. I think we have to criticize less and work more, focus and solve the emerging problems”, said the minister of education during the meeting.

For the next week, Daniel Rogoża and Gabrielius Zaveckas will be watching the work of the education department, executives and officials. They will visit the institutions supervised by the Ministry, i.a. the National Examination Center.

All of the participants of the project “Students – to the government” have a similar plan for this week. They will be observing the work of various ministries, participate in conferences and sessions of the government, meet interesting people i.a. a Lithuanian skid artist Benediktas Vanagas. The objective of the project, which has been running for 8 years, is to promote the activities of the governmental institutions of Lithuania, as well as to encourage the young people to cooperate in the political processes and civic engagement.

Kwiatkowski: Even 10 more students in Polish schools is already a success