Vilnius of 1944. Commemoration of Operation “Gate of Dawn” 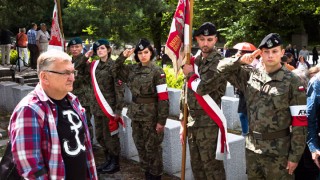 On 7th July one of the bloodiest fights of the Vilnius and Navahrudak Home Army brigades, Operation “Gate of Dawn”, also known as the Vilnius Uprising, took place. It was part of Operation “Tempest”, intending to liberate borderland cities of the Second Polish Republic from the Red Army advancing to occupy it. This was to be done by the Home Army exclusively. After 72 years, inhabitants of Vilnius and guests from Poland paid tribute to the fallen insurgents.

As usual, among those who gathered at the Rasos Cemetery were Polish combatants from the Vilnius region, representatives of the Embassy of the Republic of Poland in Vilnius, and Vilnius inhabitants, who, this time, unfortunately, comprised a small group. However, the commemoration was attended by numerous guests from Poznań and Wrocław, with whom several participants of the fight for Vilnius arrived.

92-year-old Antoni Zdrojewski of the Home Army 2nd Brigade did not take part in the capture of Vilnius, but disarmed what remained from the German troops, retreating towards Courland. Ryszard Filipowicz – today also an inhabitant of Wrocław – was born in Pavilnys, and as a young boy participated in diversionary actions. During the “Gate of Dawn” operation, he helped at the hospital and buried the fallen Home Army soldiers.

Every year, fewer and fewer veterans of those fights are arriving in Vilnius in July to pay tribute to their fellows. Fortunately, the youth also remembers about the Vilnius Uprising, sometimes even those who have no family connections with the Vilnius region. They see that “Gate of Dawn” is not less important for the Polish history than, for example, the Warsaw Uprising, of which probably every Pole knows. Still few know of the Vilnius one, although – contrary to the Warsaw Uprising – it was partly successful: right-bank Vilnius was liberated, though the idea of capturing the city with an attack from the outside (and not from the inside, like it was in Warsaw), poor ordnance, and failing communication did not let Vilnius Poles’ dreams come true.

The commemoration of the 72nd anniversary of Operation “Gate of Dawn” is going to be finished with a ceremony on 13th July in the Kriaučiūnai village, where the last great battle of the Vilnius Home Army with the retreating Hitlerites took place.

Names Spelling Issue Will Be Passed to the Next Seimas