Ceremony in Paneriai on 185th Anniversary of Battle for Vilnius 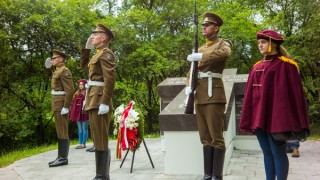 The ceremony in Paneriai on the 185th anniversary of the Battle for Vilnius, fot. wilnoteka.lt/Bartosz Frątczak

Poles and Lithuanians commemorated together the 185th anniversary of the Battle of Paneriai, also known as the Battle for Vilnius or Battle of Vilnius. It was one of the biggest battles of the November Uprising. In Paneriai, by the monument memorialising the insurgents fallen in 1831, flowers were laid by representatives of the Lithuanian Ministry of National Defence and Polish Embassy in Lithuania, as well as Polish and Lithuanian community-based organisations.

The representatives of the Ministry of National Defence, Lithuanian Army, and Polish Embassy paid tribute to fallen insurgents of Antoni Giełgud’s Polish units. Flowers were laid also on graves of the Russian Army soldiers resting nearby.

The Monument in Paneriai, which commemorates the November Uprising, was erected in 2001 where one of the most important fights of this uprising had taken place, the Battle for Vilnius. The events, which had tragic consequences for the insurrectionist troops, happened in the Paneriai Hills, west from the city, on 19th June in 1831. In this battle the insurgents, who were commanded by Generals Antoni Giełgud and Dezydery Chłapowski, fought against outnumbering Russian forces under the command of Gen. Dmitri Osten-Sacken. Comprising of 25,000 soldiers and 70 cannons, the Russian Army repelled easily the attack of the Polish units, which lost 2,000 soldiers, whereas the Russians 400. The fallen soldiers were buried near the battle site.

On the Monument, which has been shaped as a cross, there are tablets in two languages, Lithuanian – “UŽ MŪSŲ IR JŪSŲ LAISVĘ” – and Polish – “ZA NASZĄ I WASZĄ WOLNOŚĆ” [FOR OUR FREEDOM AND YOURS]. At the base of the cross, the date 1830-1831 has been placed. On the socle under the arms of the cross, in turn, there is an inscription in Lithuanian (on the left) and Polish (on the right) – “The site of the battle of Lithuanian and Polish insurgents under the command of Gen. Antoni Giełgud with Russian troops on 19th June 1831. Six hundred insurgents died here. Glory to the fallen.”

Another failed approach to the legalization of diacritics in documents. Deputies returned the project to the…
L24.lt April 12, 2022

Lithuanian Parliament is urgently proceeding with a project on facilitating the change of the nationality entry…
L24.lt March 10, 2022