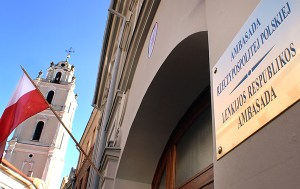 Only a few years ago Poland was considered a friend by more than half of Lithuanians. Today as few as 12 percent of the society thinks so. Fot. Marian Paluszkiewicz

Poland is Lithuania’s second enemy after Russia, the recent poll shows. Even Belarus, which is considered to be the most faithful ally of the Kremlin, is liked much more than Lithuania’s ally in the NATO and European Union in a potential conflict with Lithuania.

Only one in ten Lithuanians considers Poland a friendly neighbour. According to the survey “Spinter tyrimai”, which was carried out at the request of the delfi.lt portal, countries that are the friendliest to Lithuania are Baltic – Latvia and Estonia – and Scandinavian – Norway, Denmark, Sweden, and Finland. Russia is considered to be Lithuania’s biggest enemy – as many as 72.5 percent of survey participants expressed such an opinion. Whereas the society’s negative view about Russia, which has been changing significantly for many years, should not be surprising for anybody, the image of Poland as a hostile country is shocking indeed, and the political scientist Nerijus Maliukevičius makes the media pay attention to this. As the survey carried out in 2006 by the Opinion Research Centre “Vilmorus” indicates, Poland was then regarded as a hostile country by only 7.4 percent of the society, and more than 53 percent thought that Poland was a friend. A better opinion held by Lithuanians was only that about Latvia, which was believed to be friendly by 60.8 percent of the society. The most hostile countries were then Russia (61.5 percent) and Belarus (50.2 percent). Today Poland is regarded as a friend by only 12.6 percent of Lithuanians.

According to experts, politicians and intellectuals should take care of the hostile image of Poland among the Lithuanian society and hold a serious discussion on the subject. Meanwhile, Lithuanian Internet users, not waiting for the politicians and intellectuals to follow the scientist’s advice, have already opened up a discussion, leaving hundreds of comments on Internet forums under texts about the results of the survey. Having analysed the discussion, we can conclude that most of the participants absolutely agree with the public opinion published by the “Vilmorus” about Poland as a hostile country. The part of them who do not agree with the opinion find the results objective and point out to reasons why Lithuanians’ view about Poland has worsened in the last few years. “The major achievement of Grybauskaitė’s leadership was making as many enemies as possible, so, wherever you look, there’s an enemy, and she herself always poses by some gun. You’ve chosen that lady, so get ready to war, ‘cause she doesn’t think about anything but who to fight with […],” wrote “Taip” from Klaipėda. His opponent, although he belongs to Grybauskaitė’s supporters, also thinks that it is the president who contributed the most to the change in the Lithuanian society’s attitude towards Poland.

“I can’t but laugh when somebody says again about bad Polish-Lithuanian relations. They’re normal, even too normal, as for such a neighbour like Poland. We shouldn’t forget about the occupation of Vilnius, Polish ultimatum for Lithuania in the interwar period. Besides, after breaking the Suwałki Agreement, the territory of Lithuania is still occupied – Suwałki, Puńsk, Sejny, Białystok – lands of Balts are there, of our ancestors Prussians, not Slavs. And so I voted for Grybauskaitė, because only she had her own opinion on those ‘friends’,” wrote “Giedrius”.  Other debaters accuse the leader of the Electoral Action of Poles in Lithuania, Member of European Parliament Valdemar Tomaševski, that his and his party’s actions influenced the most the deterioration of the Lithuanian society’s opinion on Poland. They did not also spare words on Polish Minister of Foreign Affairs Radosław Sikorski, who – according to some forum users – has contributed to Lithuanians’ worse opinion about his country.

“It is Radosław Sikorski, not Lithuanian intellectuals, who must revise his position, as their work is crossed out in one go by Nazi politicians,” claims “Hamas”. Among the forum users, who look for and find who is guilty for the worsening perception of Poland by the Lithuanian society, a considerable part comprises those who hold the opinion that the true inspirator and the major beneficiary at the same time of the worsening relations between Poland and Lithuania is Russia. “If the authorities of Russia with the help of Lithuanian nationalists manage to make Poland the official enemy in Lithuanians’ perception, it’ll be a great victory of Putinists not only against Lithuania and Poland, which are now working side by side in Ukraine, in Georgia and Moldova helping these countries integrate with the West, but also against the European Union and NATO,” believes “VL”. “Miaukse” agrees with him: “Poland is not a hostile country to us; it’s just Russia that does everything to make us think so. That Poland is hostile to Lithuania.”

“Ne”, in turn, claims that the Lithuanian authorities also contributed to the worsening opinion on Poland. “[…] The authorities are also to blame, as they have not yet approved the Act on National Minorities, ‘cause it’s not within their scope of responsibilities. Those who behave that way are true enemies of Lithuania, as they have one aim, ‘divide and rule’. Just like the Kremlin,” the forum user writes.

WHICH OF THE NEIGHBOURING COUNTRIES ARE THE MOST HOSTILE TO LITHUANIA?

WHICH OF THE NEIGHBOURING COUNTRIES ARE THE FRIENDLIEST TO LITHUANIA?

Szczerek in PKD: Reality in Vilnius Fascinates Me

Another failed approach to the legalization of diacritics in documents. Deputies returned the project to the…
L24.lt April 12, 2022