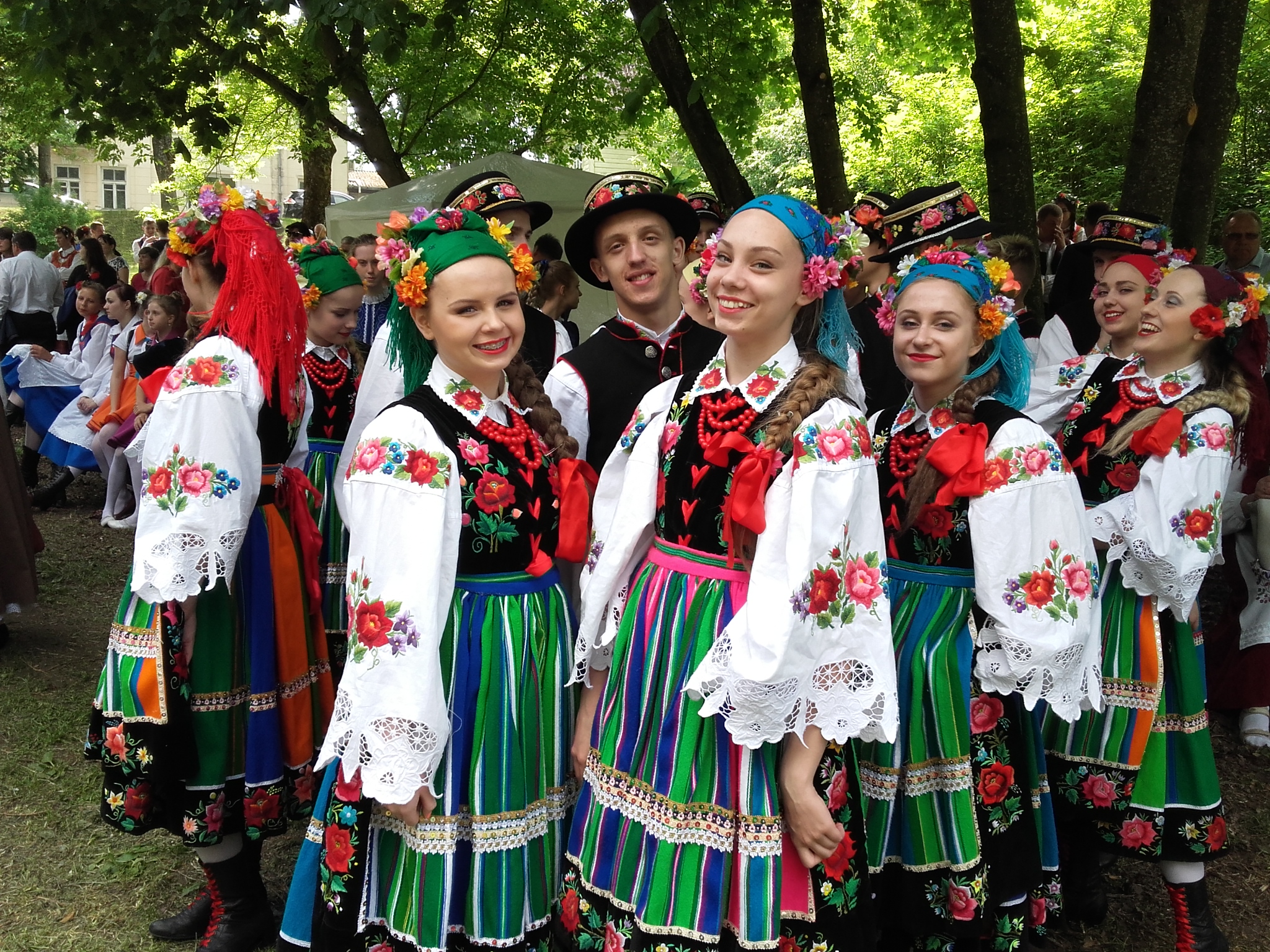 On the 29th of May in Trakai, in the midst of its beautiful landscape full of  lakes and with wonderful weather, 25th Festival of Polish Culture of Trakai district  took place. Although the first Festival took place in Senieji Trakai,  for a couple of years it is held in the former capital city of Lithuania i.e. Trakai.

Festive and colorful parade marched from the Trakai “Palace of Culture’ to the Trakai  Parish of the Visitation of the Blessed Virgin Mary. The participants prayed in order to thank God for saving traditions, songs, and Polish culture in the region.

The mass was celebrated by Dean Jonas Varaneckas. The mass was truly unique for at least three reasons. First of all – because of the beautiful music performed by  the trio “Hanka” from Paluknys and women’s band ‘Stare Troki”, under the direction of Liliana Kieras. Secondly, on Sunday Corpus Cristi was celebrated. It is one of the most important holidays in the Catholic Church. Thirdly, priest Jonas celebrated his silver jubilee oh his priesthood on that day. The participants of the Festival, guests, parishioners from Trakai, Old Trakai and Grigiškės extended their heartfelt thanks to priest Jonas and presented him with flowers.

Priest Jonas Varaneckas is famous for his extremely touching sermons. Also this time his sermon was unique as he spoke about the vital importance of songs in the life of every human being, especially a catholic. The sermon ended with the words: “Jingle, Polish songs!” Certainly, many Poles were moved by those final words  during the Mass in Trakai Church on that day.

Festive beginning of the Festival was maintained in the Mickiewicz’s tradition where the landlord of the manor welcomes notable guests. And although the festival is a celebration mainly of Poles from the Trakai region, every year the arrangers are faced with a difficult task as they strive to meet the expectations of their loyal, native audience. Most viewers used to attend all 25 festivals that took place so far. At first, they took part in the event as participants. Subsequently, they became its arrangers. Finally, today they are the audience. Therefore, it wasn’t easy to surprise them. Yet, the arrangers managed to prepare an amazing event as usual. There were interesting dances, well selected repertoire, more and more talented young soloists. What is also nice about the Festival, is the fact that it does not only serve as an opportunity to meet friends and relatives but it also appears to be a peculiar representation of several generations of Poles of Trakai region.

Traditionally, the Festival began by performing “The Oath”. Then, joint choir of Trakai region teams performed songs which have been unitng the generations of Poles for many years. Most of the songs performed during the Festival were composed by authors from Trakai district.

Many distinguished guests arrived to the 25th Festival of Polish Culture of Trakai District. Among them were: Waldemar Tomaszewski  – member of the European Parliament and chairman of the Electoral Action of Poles in Lithuania and Union of Christian Families, Stanisław Cygnarowski – Minister Counsellor, Consul General, Head of the Consular Department of the Embassy of the Republic of Poland in Vilnius, Michał Mackiewicz – member of the Parliament of the Republic of Lithuania, chairman of the Association of Poles in Lithuania, Edita Rudelienė – Mayor of Trakai region, Iwona Borowska-Popławska – from the Association “Polish Community”, and representatives of local authorities and self-government.Sponsors of this year’s Festival were: the Association “Polish Community”, Self-government of Trakai district, the Department of National Minorities of the Government of the Republic of Lithuania, Vilnius district branch of the Association of Poles in Lithuania and the company ” Baltų amatai “.Traditionally, bands of Trakai district presented their achievements from the whole year. Apart from them also the quests had a chance to present their works. Among the performers were: “„Troczanie”, „Cantemus”, band „Hanki”, „Grzegorzanie”, „Stare Troki”, „Połuknianie”, Russian folk band  „Zabawa”, band „Randez-vous”, Karaim band „Birlik”, „Landwarowianka” and „Zgoda”. Although each performance met with loud applause, it was a dancing group “Perła” from Niemeczyn that was, beyond a shadow of a doubt, the star of the Festival. After winning in a TV project it became famous across the whole Lithuania but it was already famous in other countries before. The dancing group, lead by a young and ambitious choreographer German Komorowski, definitely charmed the audience in Trakai. Those young people from K. Parczewski Gymnasium present a big talent combined with the energy of youth, the verve, remarkable enthusiasm, immaculate performance and great attention to details and movements. The Kujawiak, the Oberek, the Kozachok, men’s dance and highlander’s dance – each of those dances was worth repeating. The little ones were watching their younger colleagues with evident admiration. The sparkle in their eyes seems to be a good omen for the future. It seems that there will be many talented young people in Vilnius in the  following years, who will be passionate about music and dance. Children’s dance groups from Trakai district  have also performed during the event. There was a chance to watch performances of such groups as: „Wesołe nutki” from Lentvaris , „Tęcza” from Old Trakai”, „Strumyk” from Paluknys, „Biedronka” from Trakai, „Gaik” from Rūdiškės.Famous hits like: „Bo wszyscy Polacy to jedna rodzina”, „Kolorowe Dzieci”, „Bo świat to my” sounded extremely cheerful when performed by the group.Planning and organizing such an event require  considerable effort and a lot of work especially  from the Polish schools of Trakai district, teachers, teams’ management. Special thanks should also be given to those who participate as amateurs as they manage to find time for the meetings, singing together, and preserving and passing on tradition and patriotism. The famous words from „Konrad Wallenrod”, i.e. “scatheless is the song”, were quoted by the chairman of the Association of Poles in Lithuania – Michał Mackiewicz. Thus, it can be said that music unites people, brings opposites together, teaches humbleness and love.“I devoted half of my life to the Festival of Polish Culture of Trakai District”, said the director of the group „Rudziszczanie” Maria Jankowskaja who was celebrating the 55th jubilee on the following day. “Those festivals guarantee incredible emotions and feelings. It is a great opportunity to learn an improve. This event is somehow ‘wandering’ across the Trakai region as every year it  is held in a different place inhabited by Poles. Each year we try to do our best to make it perfect,” said our interlocutor.Edward Mogilnicki who is the director of the group „Prząśniczka” from  H. Sienkiewicz High School in Lentvaris, asked about his thoughts on the silver jubilarian, said that it was a valuable opportunity for children to present the effects of their yearlong  artistic work and to compare with other groups.“I have been working with the youth for many years and I have to say that  artistically talented people aren’t born every year. From my own experience I know that there are classes full of artists as well as classes full of mathematicians, classes full of athletes, and classes  full of passive observers of life. It is important to find those individuals and help them grow as artists,” said Edward Mogilnicki. According to the manager of the group „Troczanie”, Dinara Karaniewska, Polish bands from Trakai dsitrict are now  experiencing kind of a rebirth as more and more young people get involved in artistic and social work.According to many Poles who attended the Festival, there is a huge need for such events.We live in the times when Christian, family, enthusiasm and hope values are under threat.  There is a lot of hostility towards each other in people  and that is the reason why there is a need for reminding of the importance of unity and optimism. Such festivals are a great way to do so. It is a great occasion to remind the famous words of Johann Goethe –  “bad  people never sing”. Those were Poles of Trakai district who sang so beautifully on Sunday. They were singing very long as the Festival lasted until late in the evening. A Polish song traditionally aroused joy and hope and it united people as it has always done.

“May on the Neris”: For Those Who Can Appreciate Multiculturalism