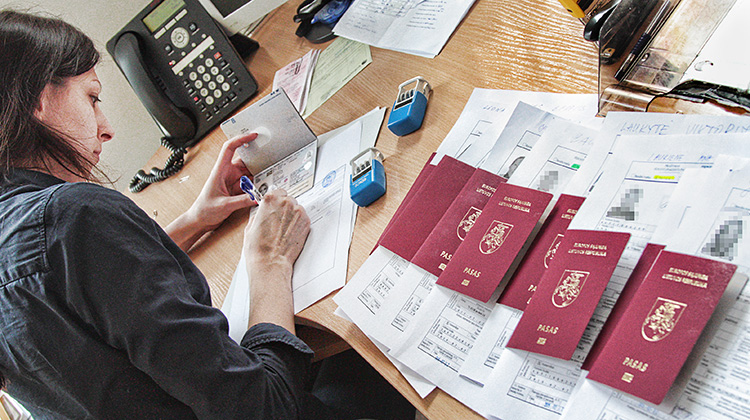 What is written on the first page of the passport has legal force, whereas a note on any of the following pages is of no validity. Fot. Marian Paluszkiewicz

On Wednesday, 27th April, the government did not approve the bill which was to allow the original spelling of non-Lithuanian first and last names on the second page of the passport.

The Cabinet of Ministers justified its negative decision saying that the new regulation would lead to chaos, because, as it thinks, it would create conducive conditions for establishing two and more identities in Lithuania’s and other countries’ official registers.

The government, as it claims, does not see reasonableness of the amendments, for the original surname spelling – pursuant to the statutory interpretation of the Constitutional Court – will not be legally valid. The bill prepared by Gediminas Kirkilas, the Social Democrat Deputy Chairman of the Seimas, and Irena Šiaulienė, the Chairperson of the Social Democrat Party faction in the Seimas would allow national minorities’ representatives and Lithuanian women who have married foreigners to have their names spelled in the non-Lithuanian form in Lithuanian passports.

“The government’s decision didn’t surprise me. It had to be negative. National minorities and women who have married foreigners do not agree to have their first and last names spelled in their original form on the second page of the passport and on the reverse of the ID card. It would not have any legal validity nor would it solve any administrative problems whatsoever. I hope the government will make the appropriate decision soon and allow the original first and last name spelling on the first page of the passport,” Gediminas Kirkilas told “Kurier.”

Meanwhile, when interviewed by “Kurier,” Deputy Chairperson of the Electoral Action of Poles in Lithuania Wanda Krawczonok said that she really doubted the government would allow the original name spelling on the first page of the passport.

“I think that in this term of office, any bill concerning the original spelling will not be passed. There’s no permission of the authorities to do that. We’ll have to wait for the Lithuanian society to ripe for it. The bill on the original spelling should be approved some day, but not now. We live among European, democratic nations; some day Lithuania will also mature enough to be one,” says the AWPL Member of Parliament.

Wanda Krawczonok hopes that at least children will live to see European standards and be allowed to have their first and last names written in their original form in the passport.

“The government should understand that it troubles not only national minorities, but also women of Lithuanian nationality who have married foreigners. They encounter lots of difficulties because of the incorrect surname spelling,” explains Krawczonok.

The Constitutional Court of Lithuania explained that what is written on the first page of the passport has legal force, whereas a note on any of the following pages is of no validity. The Polish minority in Lithuania is against such a solution as well, as it would accept the original surname on the first page only.

“No wonder the government rejected the bill on the original first and last name spelling on the second page of the passport. Such permission would not solve any problems. The second-page idea is nonsense. The passport is a document; in whole Europe, when checking documents, officials look at what is written on the first page, not the second one. The Constitutional Court also negatively commented on the matter,” Wanda Krawczonok pointed out.