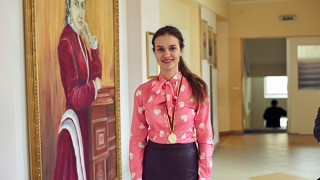 Dominika Wasilewska, the winner of this year’s Olympiad of Literature and Polish Language is currently a student of the 11th grade. During this school year she also participated in the English Language Olympiad and the Biology Olympiad. She did not manage to get to Biała Waca for the announcement of results, only for the closing ceremony – straight from the Chemistry Olympiad. Dominika dreams of studying medicine and she is consistently making preparations for it, “Polish is my native language, I love it, I am proud to be Polish. I treated the participation in the Olympiad as paying homage to the Polish language” – she told “Wilnoteka”.

Dominika was prepared to participate in the Polish Language Olympiad by Łucja Minowicz. As many as nine students of this Polish studies teacher participated in this year’s competition, three of whom were among the winners.

This year’s Polish Language Olympiad was dedicated to the 170th anniversary of Henryk Sienkiewicz’s birth and the 100th anniversary of his death and the 70th anniversary of Stanisław Barańczak’s birth. While preparing for the contest, the participants had to deepen two main topics: “Timeless values in Henryk Sienkiewicz’s “Trilogy” and “Stanisław Barańczak – the witness and creator of his era”. The competition struggle was held at the Lithuanian University of Educational Sciences and the host of the closing ceremony and the announcement of the winners’ surnames was the Eliza Orzeszkowa Junior High School in Biała Waca (the Šalčininkai region).

The XXVII Literature and Polish Language Olympiad’s participants were 31 students from the Vilnius schools, from regions: Vilnius, Šalčininkai and Švenčionys. As every year, they wrote essays on the first day and delivered oral presentations on the topics concerning the history of literature and linguistics on the second day.

As noted Dr. Irena Masojć from the Lithuanian University of Educational Sciences, the chairperson of the contest committee, the oral presentations were better than essays. The best essay – the one of the Olympiad’s winner received 38 points (the total score was 40), but there were many highly evaluated oral presentations.

The 10 chosen winners will go to Warsaw in April, where they will represent Lithuania in the nationwide Literature and Polish Language Olympiad in Poland.

The winners of the XXVII Literature and Polish Language Olympiad are:

All the participants of the Olympiad and their teachers were given gifts, and the winners – diplomas and prizes. Prior to their going to Warsaw, they will take part in workshops at the Lithuanian University of Education Sciences (LEU). The Polish studies lecturers in Vilnius: at LEU and at the Vilnius University will deliver lectures and provide the winners with individual consultations, which will help to prepare them for the nationwide Olympiad in Poland.

Based on: own information.