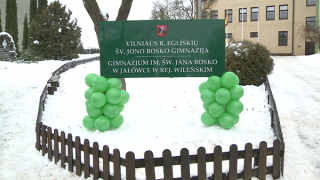 The Saint John Bosco Secondary School in Egliškių (Vilnius region) proves that at the time when other schools are being closed because of the shortage of children attending them, it is still possible to transform a primary school into a secondary one and gain the “gimnazjum” status. How to achieve it? Headmaster Zbigniew Czech answers briefly, “Work, work, work.” The gimnazjum inauguration took place exactly on the fifth anniversary of Saint John Bosco becoming the patron of the school.

“The teachers really perform great. We have competition – other schools in the neighbourhood, but the teachers’ good work attract parents, who show their trust in us wanting their children to attend this very school. And as the results are good, we keep setting ourselves new goals. The first aim was a secondary school – we achieved it ten years ago. Then, when other schools became gimnazjums one by one, we lacked just a few students to meet the requirements. Fortunately, God’s Providence caused several students to join our school and we too were able to face the challenge. We gained the gimnazjum status. It’s an effect of the teachers’, students’, and parents’ work. This triangle, student – parent – teacher, is the most important in the school,” said Zbigniew Czech, the headmaster of the Saint John Bosco Secondary School in Egliškių, in the interview for Wilnoteka.

Above all, the ceremony gathered the school community: students, teachers, and parents. Friends were also present – these were people who supported the school in its efforts so that the secondary education programme were accredited. Priests who did cooperate with the school or still are doing this constituted the most numerous group at the event. Fr. Tadeusz Jasiński, the Holy Spirit parish priest in Vilnius, told Wilnoteka that he felt a strong emotional connection to the school – he worked there as a teacher of Polish and history in 1980, and when after seventeen years of pedagogical work he entered seminary – as a teacher of religion. He had performed those duties until very recently – up to the time when he became the Holy Spirit parish priest.

The gimnazjum inauguration was preceded by a mass concelebrated by befriended priests. Talking to the students, Fr. Eduardas Kirstukas, the Saint Mary of the Assumption parish priest, said, “You have reasons to be happy and proud today, as not every school has the opportunity to gain the gimnazjum status. However, being a gimnazjum student obligates you to face all the challenges that the life wants you to take on. The ability to find your own way on the God’s path is extremely difficult. I encourage you, my young friends, to face this challenge of acquiring knowledge not as something that is just another chore, but as something full of joy of getting to know this beautiful world and everything that surrounds us. And by knowing the world better, you will get to know God and His might as well.”

The priests hallowed the school shields that the students would wear on their uniforms, as well as the signboard by the gateway with the name of the school.

Currently, the Saint John Bosco Secondary School in Egliškių have over 200 students from the first to the last grade. A kindergarten functions also as part of it, and in its groups there are approximately 50 children.

The school in Egliškių was founded in 1900. In the 1902-1903 school year, 49 students attended it. The wooden building in which it was located has survived; currently, a school ethnographic museum functions there. Since 1920 the school has instructed in Polish.

In 1954 the four-grade school was transformed into a seven-grade one, then in 1962 it began to have eight grades, in 1987 – nine, and in 1998 – ten. In 2006 the school got a secondary-school status. Thanks to the support from the Senate of the Republic of Poland and the Association “Polish Community,” it has been extended. Currently, classrooms are located in two modern buildings; the renovated wooden building, however, is occupied by the kindergarten. In 2011 the school was given the name of Saint John Bosco

Initially, the school community’s intention was being granted the status of a catholic gimnazjum. A contract with the Salesian Society has been even signed, but the idea has not been implemented to this day. However, as Zbigniew Czech – the headmaster of the gimnazjum – said in an interview for Wilnoteka, it was something that the school would aim at in the future. It is achievable, as this institution has long-established tradition related to the catholic direction of education, and its patron – Saint John Bosco (1815-1888), the founder of Salesians of Don Bosco – is called the “Father and Teacher of Youth.”