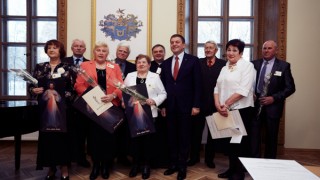 The fifth anniversary of PUTA in Šalčininkai, fot. wilnoteka.lt/Bartosz Frątczak

Active seniors, affiliated to the Polish University of the Third Age in Šalčininkai (PUTA), can be met everywhere: during national and anniversary ceremonies, local events in the Šalčininkai region, concerts in Vilnius, and social campaigns. Many young people could envy their enthusiasm, vigor, and energy, combined with their worldly wisdom and experience. The fifth anniversary of the University’s activity has been organized by its senior students in the Balinski Palace in Jašiūnai.

While establishing the Polish University of the Third Age in Šalčininkai, members of the initiatory group had serious concerns about whether they would manage to cope with this task, taking into account long distances between towns, inconvenience regarding bus timetables, and the lack of University, on the basis of which the organization could operate. As it turned out, the majority of seniors, hardened to different life experiences, still want to participate actively in social life, see the world, acquire new skills, share their experience, and help one another.

During the 5 years of the University’s activity, the seniors travelled all around the Šalčininkai region, they visited other regions of Lithuania, they toured Poland and followed the traces of Pope John Paul II and marshal Józef Piłsudski. As part of an ecumenical project, they visited Orthodox, Evangelical, Islamic, Jewish, and Karaim temples. Altogether, there were 68 trips within 5 years.

Together with students from the Šalčininkai schools, the seniors participated in the intergenerational integration projects, what is more – in lectures in accordance with the curriculum and in special-interest groups.

The University of the Third Age is an activity for the elderly which is popular around the world. The seniors, who once led an active professional and social life, do not want to immure themselves along with retirement, limit themselves only to religious practices and bringing up their grandchildren. The activity of the University of the Third Age is about self-education, expanding your knowledge and acquiring new skills, filling the free time, maintaining social ties, and participating in socially useful actions.

The Polish University of the Third Ages was established on 15 January 2011. It associates 92 seniors from different towns in the Šalčininkai region, it has three branches: in Šalčininkai, Jašiūnai, and Eišiškės. 74 of the University’s auditors have higher education, they are primarily retired teachers (63 people), but also accountants, financiers, agronomists, and doctors. Women constitute the vast majority: only 21 men are members of the University. The current head of the organization is Antoni Jankowski, longstanding manager of the Education Department in the Šalčininkai region and former principal of the Šalčininkai Orphanage.

European Parliament concerned about discrimination against Polish schools in Vilnius