Appeal to Polish authorities: “We are determined to fight for fair treatment of Polish students!” 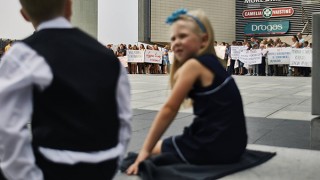 “We are determined to fight for the good of our children. Please, take immediate action in the defence of the Polish schools and Poles in Lithuania,” representatives of the Polish community in Lithuania have written in a letter to the Polish authorities including President Andrzej Duda, Prime Minister Beata Szydło, Marshal of the Sejm Marek Kuchciński, Marshal of the Senate Stanisław Karczewski, Minister for Foreign Affairs Witold Waszczykowski, Minister of National Education Anna Zalewska, and Chairman of Prawo i Sprawiedliwość Jarosław Kaczyński.

As Renata Cytacka, a Vilnius City Municipality councillor told Wilnoteka, the Władysław Syrokomla and Joachim Lelewel Secondary Schools have been waiting for months for the decision of the education authorities concerning the accreditation of the secondary education curriculum. Letters and questions from the communities of the aforementioned schools to the Ministry of Education and Science remain unanswered. Therefore, a letter has been addressed to the top Polish authorities with reference to this case. Those who have put their signatures to the letter are Józef Kwiatkowski, a member of the Seimas of RL and the chairman of the Association of Polish School Teachers “Macierz Szkolna” [trans. Educational Society] in Lithuania; Renata Cytacka, a Vilnius City Municipality councillor; and Danuta Narbut from the Vilnius Parents’ Forum at Polish Schools. In the appeal they presented the situation of Polish schools in Vilnius and gave details about applying for “gimnazjum” status [an official secondary school status that would prevents the schools from being transformed into a primary school or progimnazjum due to the school reorganization plan in Lithuania; translator’s note].

“Despite the numerous protests and against the will of 60,000 Polish residents in Lithuania who petitioned against the amendment to the Bill on Education, this amendment was implemented on 17th March 2011. The modifications were accepted solely because of political reasons and without any preparation for their execution on the part of the state. There have not been any consultations with the Polish society. Sometimes the Lithuanian authorities claim that, allegedly, there were Polish minority group representatives – but without a mandate from any social group.

All of the attempts and proposals of parents, teachers and students have not been answered. The recent incidents in Vilnius exacerbated the situation in the field of education considerably. The liberal-conservative coalition has previously resorted to blackmail techniques and double standards. Despite all of this, we are determined to fight for the good of our children.

The 2011 Education Bill discriminates against national minorities and is a tool for the decline in the status of their languages. It appears that the authorities want to depreciate minority languages and eliminate them from public life. The major threat at this time is the closure of schools with Polish as the language of instruction under the pretext of a small number of students and, what is more, the closure of secondary schools, citing a lack of accreditation. It is forbidden to form the 11th and 12th grades, thus degrading the secondary schools to the level of primary schools. In practice, this bill will lead to the complete liquidation of Polish education!

The interventions of our representatives in the Seimas of RL finally took effect and permitted the education reorganization period to be prolonged until September 2017. The Lithuanian parliament passed the amendments to the Education Bill in June 2015, extending the alteration period to two years. However, the local authorities responsible for the school system in Vilnius did not respect the statute. During the holiday season the Vilnius City Council voted through a by-law regarding the further degradation of national minority schools from primary to secondary level. Among those affected were the Szymon Konarski Secondary School in Vilnius and the Secondary School in Lazdynai. They are both excellent Polish schools with a long tradition of performing well in Lithuania. They have educated many generations of great Poles. Parents of many of the students appealed against the decision to downgrade the school statuses to primary schools. There is a great danger of the schools being closed down, particularly due to financial shortages.

The future of yet another school, the Joachim Lelewel School in Vilnius, is also uncertain. It has been permitted to function for just one more year and faces the threat of having to leave the current building in Antakalnis, a district with a large number of Polish residents. This building has a symbolic meaning, as the first legendary Polish school No. 5 was located there after World War II. Not long ago it was renovated thanks to donations from parents and community members as well as an EU grant. It is scandalous that the Vilnius authorities are forcing the Polish students to move to another building, (a branch building in Žirmūnai), thus leaving a huge district without a school with Polish as the language of instruction. Currently, students from 249 streets attend the school. The matter was carried out in a very perfidious way, with the use of blackmail – Deputy Mayor Benkunskas arrived at a meeting with the school community and said that they would be granted accreditation if they moved to the other building, despite this being in a worse condition and not as accessible as the current one.

The Joachim Lelewel School, just like the Lithuanian Daukšos School, has chosen Engineering as the main field of teaching. When Minister Pavalkis handed in his resignation and his duties were temporarily performed by Minister Bernatonis, the Daukšos School was accredited within a few days without any problems, yet Lelewel School remained without accreditation. This decision proves the lack of good will on the part of politicians and unfair treatment when it comes to the education system in Lithuania. Overall, the ruling coalition downgraded nine schools for national minorities in Vilnius during the holidays. What is most interesting is the fact that three secondary schools with Lithuanian as the language of instruction (the Mikalojaus Daukšos, Tuskulenu, and Abraomo Kulviečio) were accredited.

The great Władysław Syrokomla School, attended by some 870 students, has yet to be accredited as a “gimnazjum.” The Lithuanian authorities are playing for time, and this causes anxiety and uncertainty in the school community. Appeals and pleas do not work.

The lack of stability and constant changes in the schools with Polish as the language of instruction may result in parents resorting to sending their children to Lithuanian schools. We cannot let this happen, as we will then cease to exist as Poles in Lithuania.

Please, help us solve this situation, since our Polish children are exposed to enormous stress due to the above-mentioned problems. Despite all our strenuous protests, the Lithuanian authorities intensified the enforced Lithuanization by adopting the unified curriculum and Matura exam, what is evidently detrimental for the Polish children of Lithuania. They do not allow the accreditation of Polish schools, and this, in practice, leads to the closure of the schools.

The critical situation of Polish education in Lithuania and disregard for the pleas of parents and teachers of Polish children forced Poles in Lithuania to, just like three years ago, start the new school year with a strike. Some 90% of Polish schools in Lithuania participated in this strike. Instead of sitting in classrooms, about 2,000 students protested by participating in a mass for the defence of our Polish schools celebrated by the image of Our Lady of the Gate of Dawn. We are very grateful for the support and arrival of Marek Kuchciński, a member of the Sejm of RP, who was present and showed his solidarity with us, countrymen of Lithuania, on behalf of all Polish parliamentarians. Taking this opportunity, we would like to thank you for the win of Prawo i Sprawiedliwość (PiS) [trans. Law and Justice; a national-conservative political party; translator’s note] in the presidential and parliamentary elections in Poland. This victory gained by PiS, the patriotic option, instils us with hope that our problems will finally be resolved.

On the 16th October, in front of the Government of RL, 4,000 Poles from Lithuania protested against the unjust social and education policy of the state. The protest rally was organized by representatives of work teams, trade unions, education, cultural, and social field communities, as well as parents from children at Lithuanian and national minority schools. We will picket, file petitions, pleas, and complaints to the court to the bitter end. Many organizations and associations have pronounced that they would not give in. We are indignant at the actions of the Lithuanian authorities. Their actions seem designed to cause destabilisation and disorganization. After 25 years of completely unsuccessful talks we are forced to take other steps, more radical ones.

Despite attempts to intimidate us and threats of financial penalties, parents and teachers are determined to fight for fair treatment of Polish students. The EU law regarding national minorities and the Treaty between the Republic of Poland and Republic of Lithuania on amity and neighbourly collaboration assures access to culture and education in our native language.

For comparison, Lithuanian schools in the Sejny region are an example of ideally-managed education for Lithuanian students. And we demand the same treatment for Poles on the other side of the border! The Polish school liquidation process is just one element of the anti-Polish activities of the Lithuanian authorities that we have been witnessing for many years now. These activities are aimed at the Lithuanization of Poles and de-Polonisation of the Lithuanian regions that have been inhabited by Poles for hundreds of years. We are totally opposed to this!

We Poles in Lithuania are seeking help under international law and European Union law but we feel that we are losing this fight to defend Polish schools in Lithuania.

Please, take immediate action to defend the Polish school and Poles in Lithuania!”

Józef Kwiatkowski, a member of the Seimas of RL as a representative of AWPL [Polish: Akcja Wyborcza Polaków na Litwie, trans. Electoral Action of Poles in Lithuania], the chairman of the Association of Polish Schools Teachers in Lithuania “Macierz Szkolna” [trans. Educational Society]
Renata Cytacka, on behalf of the Vilnius AWPL councillors
Danuta Narbut, on behalf of the Vilnius Parents’ Forum at Polish School

Article written on the basis of our own information.

An appeal in defence of Polish schools in Vilnius

This cockerel is no eagle