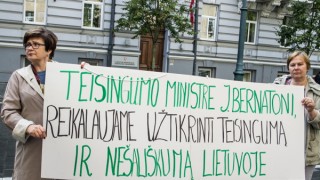 Picket in front of the Ministry of Justice in Lithuania, photo by wilnoteka.lt/Bartosz Frątczak

In front of the building of the Ministry of Justice there is a picket whose participants demand an in-depth analysis of court cases regarding reorganisation of schools of national minorities. According to the parents, “we have evidence to think that the hurried decisions were biased and made for political reasons”. It is another protest organised by the Strike Committee of Polish Schools in Lithuania, the Forum of Parents of Polish Schools in Lithuania and the School Protection Committee.

A couple of days before the beginning of the new school year, the headmaster and the parents of the students from Konarski High School in Vilnius were informed that the Vilnius City Council appealed to the court’s ruling in regards with the suspension of the Council’s Act from 29 July 2015 about the reorganisation of the school. They also found out that they have 14 days to take side in this matter. On 31 August, the headmaster of Konarski High School was informed that in the new school year the school cannot admit student to 11th and 12th grades because the Lithuanian Supreme Administrative Court, the court of higher instance, left the act of the Council about the degradation of the school in power. The same decision was made in regards with the schools with Russian as the teaching language: Karsawin and Pushkin Schools, Polish-Russian Lazyndai School and Lithuanian Fabijoniškių School.

According to the parents, the courts acted in a scandalous way: parents and the school community did not have the opportunity to appeal to the court’s ruling; students, parents and the school were deprived of the right to defend themselves. The picket in front of the Ministry of Justice in Lithuania was organised with a hope that the Minister Juozas Bernatonis will take interest in that case and request an analysis of the court cases concerning the schools of national minorities.

The organisers of the protest prepared a petition the Minister Juozas Bernatonis in which they presented the legal situation in which the reorganised schools are. They are also asking the Minister to ensure justice, independence of courts and respecting the rights of national minorities in Lithuania.

The Deputy Minister of Justice Julius Pagojus invited the representatives of the protesters to discuss the situation.  He did not make any promises but he ensured that he will look into that situation, make conclusions and present an answer.

Next picket in defence of education on Wednesday