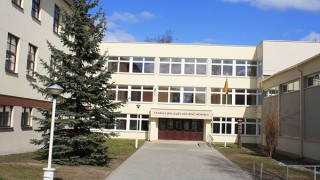 The Polish Schools in Lithuania Strike Committees, the Parents Forum of Polish Schools in Lithuania, and the School Defense Committees have issued an open letter concerning the Secondary School in Vilnius Calvary. The letter is addressed to President Dalia Grybauskaitė, Prime Minister, Algridas Butkevičius,  the Minister for Education and Science, Audronė Pitrėnienė,  and the Vilnius City Mayor, Remigijus Šimašius. As recently as last year, Polish classes were formed in the school. However, these classes were small and therefore became mixed. This school year, Polish classes in the Secondary School in Vilnius Calvary have been cancelled.

This is yet another Polish school with historical heritage in Vilnius that is being closed down by the liberal-conservative coalition on the basis of administrative acts and the manipulation of parents.

We demand the guilty to be punished, and want to see them take the full consequences for their unlawful actions. The act of closing the school in Vilnius Calvary causes the impossiblity of receiving Polish language instruction in this part of Vilnius: with the areas being Verkiai, Santaryszki, Bołtupie and Calvary.

We demand that a new Polish school in Calvary, in a separate building and with separate administration, is established. Judging by the number of  application forms and taking into consideration the fact that 20% of the population in this area is Polish, it is clear that a primary school in Calavary is needed. It is evidently necessary to re-establish a Polish primary school in this part of Vilnius.

We strongly protest against the discrimination of Polish children in Vilnius Calvary, Verkiai, Santaryszki, and Bołtupie.

The Parents Forum of Polish Schools in Lithuania

Translated by Julia Siepak within the framework of a traineeship programme of the European Foundation of Human Rights, www.efhr.eu.

M. Kuchciński: Don’t spoil something that binds us