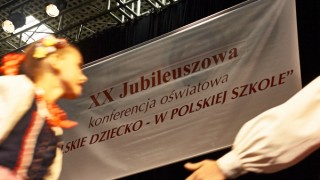 Representatives of Polish education in Vilnius County have met during the conference „Polish children in Polish schools” for the 20th time. 20 years during which the conference was taking place is a hard time for Polish education. “After the first conference, we have been heavily criticised by Lithuanians – said MEP Waldemar Romaszewski – It was said that that kind of meetings are illegal which means that even a discussion on the right of Polish children to learn in their native tongue is unwelcomed.”

The 20th conference „Polish children in Polish schools” was started by the people who are most affected by the topic of this meeting – Polish children from Lithuania. Children and teenager’s dance troupe “Dawn” from Niemenczyn gave a short concert which was viewed with pleasure by the attendees.

„After the first conference we have been heavily criticised by Lithuanians – he mentioned – it was said that these kind of meetings are illegal which means that even a discussion on the right of Polish children to learn in their native tongue is unwelcomed”.

Waldemar Tomaszewski noticed that Polish education in Lithuania still has unresolved issues which would be more severe without the engagement of the conference attendees. Not every school in Vilnius County has a defined status due to accreditation, but according to MEP, maintaining the status of a 12-year-long school may be more beneficial for those schools: “We have made a decision to postpone those reforms that we think are unconsidered”.

The chairman talked about the effort of the Polish community in Lithuania to ensure the rights of the Polish minority which are guaranteed to the national minorities in other European countries. He said the main problem is to equalise the levels of Lithuanian language exams for students of Lithuanian schools and minority schools: “The mother tongue will always be the mother tongue, while another language, even as important as the national one, will always be the studied language” – he emphasised.

Another issues are the amount of money the educational institutions receive for each student and the general atmosphere which – according to the MEP – is artificially created around Polish schools. “The situation of Polish education is particularly important in Vilnius where the fight with Polish education is especially intensified – he noticed pointing to the role of cooperation – We need to act like communicating vessels. It is not enough that in our schools the situation is secure, while in Vilnius County 6 out of 7 Polish children learn in Polish school”.

In her speech, Regina Olechnowicz the director of a kindergarten in Awiżenie put emphasis on the role of supporting Polish schools from the earliest age. The kindergarten in Awiżenie will begin a new school year in a new building which can elicit joy but also envy. “Our biggest problem can be described as „Polnibalism” – she said – One of the Lithuanian activist files a complaint after complaint and brings television crew to prove that we are discriminating Lithuanian children”. The director stressed that the complaints are groundless as there are 20 Lithuanian and only 3 Polish kindergarten groups.

The chairman of the Association of Polish Schools Teachers in Lithuania „School Matrix” Józef Kwiatkowski paid attention to the situation of Polish schools in Vilnius and presented the results of rankings. He pointed to the groundlessness of opinions about the low level of Polish schools spread by Lithuanian media, stressing that „children from Polish families often attend not the Lithuanian schools that represent a high level of schooling but the schools which are worse than Polish schools.”

Comparing the results of Lithuanian language exams in Polish and Lithuanian schools in particular towns in Vilnius County he said that, contrary to the popular opinion, Polish students achieved better results.

Jan Mincewicz, Vice Mayor of the Vilnius County, talked about 20 years of fight for Polish school and 20 years of fighting with Polish educational system. “The education in Polish schools needs to be performed in the mother tongue – he stressed – Shame on the director that does not find a teacher who will teach mathematics or physics in Polish”.

„We meet with the competitors and we are competitive” said Żaneta Jankowska, director of Ferdynand Ruszczyc Junior High Schoold in Rudomin. She emphasised the role of parents in school selection as well as the general infrastructure of the school. “Renovated building makes parents more willing to send their children to our school – she noticed – We owe a big number of primary school students to a good cooperation with the Polish nursery school and kindergarten.

In the junior High Scholl in Marijampolė, there are much less students. This school cannot count on the cooperation with a kindergarten where, despite a considerate number of Poles, the value of learning in the mother tongue is not appreciated.

„Polish education not only lasts, but can be proud of numerous triumphs – said Deputy Marshal of the Seimas of the Republic of Lithuania Jarosław Narkiewicz – The aim of the conference is to encourage Polish parents to send their children to Polish schools.”

Lilia Andruszkiewicz, the chairwoman of the Department of Education, presented the situation of the educational system. The number of Polish schools is stable, similarly the number of pupils in first grades. The status of Junior High School was acquired by 21 school in Vilnius County. The building of new kindergartens in which children would be taught in Polish is an important element of caring about Polish education.

The chairwoman of the Department of Education stressed that considering the number of renovated buildings and the amount of financing for schools, Vilnius County surpasses the capital. Taking the Matura exam and School subject Olympiads results into account, the educational results are very good.

Unfortunately, Polish education is not that supported outside Vilnius County. Edyta Tamošiūnaitė, councilwoman of the city of Vilnius, talked about the difficult situation of Polish schools in the capital. She pointed out that currently 26 trails concerning the discrimination of Polish education are taking place. “Some of the students from the last class of high school found out, a month before the beginning of a school year, that their schools have been degraded to the status of primary schools, despite the fact that the law allows for reorganisation 4 months before the start of a new school year at the latest.” she said, pointing out the flaws in Vilnius authority’s conduct.

Regrettably, Renata Cytacka, representative of Forum of Parents of Polish Schools in Lithuania, did not have good news. “Nothing happens by chance. Yesterday, when the Minister of Education Audronė Pitrėnienė announced the upcoming school year the year of communities, I took it as a mockery. Today, after listening to the speeches, I can see that this year needs to be the year of communities, we need to be united even more.”

Renata Cytacka, under the authority of the Strike Comiittees, announced the general strike in Polish schools in Vilnius County which will begin on the 2nd of September at 11 o’clock. “We, the parents, are responsible for the future of Polish schools. We cannot be intimidated, no one is going to absolve us from being a parent!”

After listening to the speeches, the relation between the situation of Polish education and the approach of the municipal authorities towards Polish minorities is even more visible. The director of J. Słowacki Junior High School in Bezdany Wiesława Wojnicz and the director of Primary School in Szumsk Janina Zienkiewicz talked about the support for their schools.

The conference attendees adopted the Resolution of 20th conference of the Association of Poles in Lithuania in Vilnius County “Polish children in Polish schools” and an “Appeal to Polish parents” in which they encourage Polish families not to give into “false and groundless propaganda of the supporters of lithuanisation of the education of national minorities”. “We appeal to you, Polish Parents, send your children to Polish schools. Let the motto of the conference „Polish children in Polish schools” guide your actions. Thanks to that, you will be able to bring up your children without subjecting them to unnecessary stress. You will be able to raise them to Poles – worthy citizens of the Lithuanian Republic. Owing to that, they will never have to blame you for taking a wrong decision when they were not mature enough to decide.” – the appeal read.

The conference on education in mother tongue has been organised for 20 years by The Association of Poles in Lithaunia in the Vilnius County. The conference is attended by the representatives of the Polish community from Vilnius County as well as from Šalčininkai District, Švenčionys District, Trakai District and Vilnius. The guest of honour was Stanisław Cygnarowski, Consul of the Republic of Poland in Vilnius.

On the basis of own information.

Demonstration in defence of the legendary Polish ‘Five’ in Vilnius