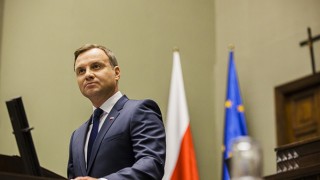 Lithuanian political scientists believe that the new Polish president will pay more attention to the East-Central Europe than his predecessor, Bronisław Komorowski. Observers of the political scene are certain that the Polish-Lithuanian relations will be still influenced by how the Polish minority problems are solved in Lithuania. Director of the Institute of International Relations and Political Science, Ramūnas Vilpišauskas, in his statement for the BNS agency said that he thinks that Andrzej Duda will continue the political program of the party he was a member of (Prawo i Sprawiedliwość), when it comes to international relations. “He will focus more on the threat coming from Russia and on promoting regional cooperation” – anticipates Vilpišauskas.

Political scientist, Margarita Šešelgytė, claims that Donald Tusk and Radosław Sikorski, who strived for a broader cooperation with the “EU elites”, failed the expectations of the Polish society and because of that Andrzej Duda will want to concentrate on cooperation with the East-Central European countries. “He is a young, energetic president, who has specific ambitions. One can assume that Poland will be even more active on the field of international politics” – thinks Margarita Šešelgytė.

The political scientist opinions are divided regarding what the new Polish president wants to achieve within the European Union. R. Vilpišauskas belief is that Duda will not try to force a quicker euro introduction into Poland and will maintain distance when it comes to integration with the rest of the EU countries. Margarita Šešelgytė thinks, however, that even though Duda’s party is a conservative one, he himself on many occasions underlined the importance of unifying Europe.

How will Polish-Lithuanian relations change after the most important office in the country has been given to a new president? Ramūnas Vilpišauskas thinks, that “those relations will depend on how old, persistent problems about surname spelling are resolved in Lithuania. (…) Recently the relations between the chiefs of the countries were the most neglected. Good relations between the governments is what Poland and Lithuania need because their regional interests are similar. Such relations could influence the course of strategic infrastructural projects.”

Margarita Šešelgytė claims that the relations between Poland and Lithuania are too political. “ The politicians and the presidents are both causing this state of affairs. Then we are talking not about the effective problem solving but about who did not do something, and so on. This is an absolutely two-sided process.”

Political scientist Vytis Jurkonis believes that with the change in the office of the Polish president no significant changes will be made regarding the state’s policy because in a big, democratic country the important decisions are not made only by one person. Therefore the improvement in Polish-Lithuanian relations depends on both sides. Jurkonis thinks that there are many common interests: “the basic infrastructural projects in our region, the civil aspects (education, culture, youth exchange), the foreign policy regarding Eastern Europe and an united viewpoint in Brussels”.

Vilnius will pay €100 in compensation for 3,8 thousand kindergarteners