The spelling of names: the case of common fatigue 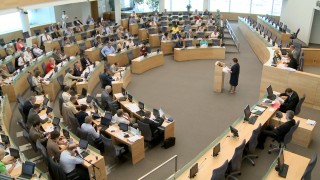 The case of names spelling is not so easy to solve. It is also really exhausting, as one can notice after today’s meeting of the parliament. In the morning, during the meeting of Mixed Group of Deputies, the asked for a break until the next meeting. In the evening, the break was necessary.

By the coalition’s decision, the draft about the rules of names spelling prepared by the Social Democrats is to be considered in parliament this week. The project is to be dealt with on Thursday. If, of course, the deputies will not need another break …

Seimas Committee on the Law and the Rule of Law proposes the permission to write the names of the Lithuanian citizens with non-Lithuanian letters existing in the alphabet on identity documents if it finds confirmation in the source document.